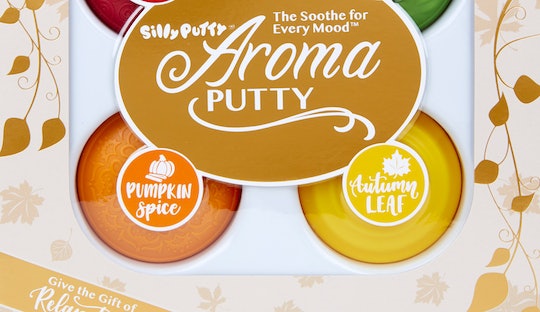 There's A Pumpkin Spice Silly Putty For Grown-Ups, & You Know You Need It

Getting on that back to school schedule can be nerve-wracking. You have to wake kids up, feed them, get them dressed, and out the door — and sheesh, all on time too. So it’s no wonder that mornings can feel manic, but they don't have to. In an ultimate ode to fall, Crayola has invented a new Silly Putty set of fall scents (including pumpkin spice) that smells like everything autumnal, and hopefully will help you reduce your stress level as well.

Smelling certain scents can be relaxing, and aromatherapy is a great way to help you unwind, according to Sleep.org. And really, is there another season alluring aromas as the fall? Probably not. The Crayola Silly Putty 4-pack set ($20) features all your favorite fall flavors (& autumnal hues), like Apple Pie (green), Autumn Leaf (yellow), Cranberry (yellow), and Pumpkin Spice (orange).

As magical as fall smells, all of those scents can be really good for your brain, too. Cinnamon is a big brain booster, reported the Huffington Post. In fact, a study found that smelling cinnamon improved memory, attention span, and visual-motor response. And the smell of apples can help alleviate migraines, the Physicians Committee for Responsible Medicine found. Plus, cloves, a spice traditionally included in a pumpkin spice blend, can (ahem) be an aphrodisiac, per Bustle. So you might consider whipping out the pumpkin-scented putty after the kiddos are already in bed.

Now, you might have some stress relievers stashed away for those days when your kids are totally uncooperative, (and no, we’re not talking about wine here). Thing is, you wouldn’t necessarily turn to Silly Putty as a way to unwind, but now you juts might want to. It allows you to reap the benefits of aromatherapy with the additional stress-relieving benefits of stretching the putty. And since it won’t leave any residue behind on your hands, you won’t have to worry about it making yet another mess for you to clean up.

Interestingly enough, Silly Putty was originally intended for adults and not kids, according to a Mental Floss article. In fact, James Wright, an engineer, created it during World War II. And if you’ve ever wondered what it’s actually made from, it’s a mélange of boric acid and silicone oil. The specialty scents and stress-relieving qualities of the fall-scented set is actually geared towards adults and teens (14 and up) because, well, kids hopefully aren't stressed and likely aren't suckers for pumpkin spice-themed things like grown-ups are. But that doesn't mean your kid can't play with them, too. There's nothing in it that makes it unsafe for kids 4 and up, a Silly Putty rep tells Romper.

If one seasonal set of pliable "dough" isn't enough for you, there’s also an Aroma Putty Gift Set, Winter Scents ($20), too. It’s full of scents that truly make it the most wonderful time of the year, like Sugar Cookie, Candy Cane, Gingerbread, and Pine-scented putty. And since they're packaged in gift sets, you can it can be a present to fellow stressed out mama, or it makes a nice gift to yourself. So get silly and grab some Silly Putty, and twist and turn your way to heavenly-scented relaxation.