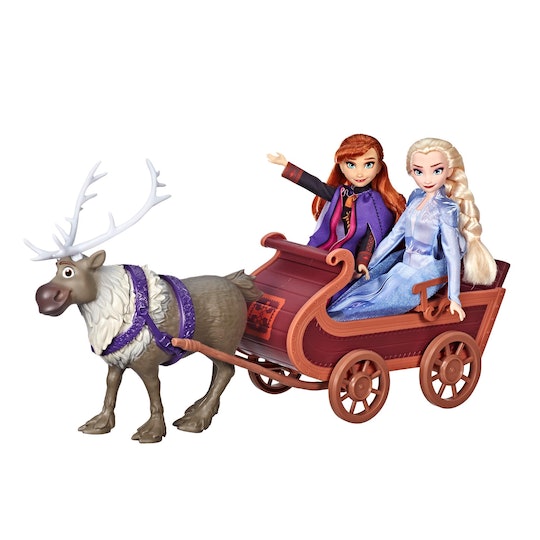 As the release date for Frozen 2 draws closer (it's Nov. 22, so close), Hasbro has created some special new gift items in anticipation of the movie. Two new singing Frozen 2 dolls are available this fall, along with lots of other new toys, and these dolls offer some of the first soundbites of the upcoming film's soundtrack. That's right, even toys today come with spoilers.

In Disney's Frozen II, royal sisters Anna and Elsa take off on an adventure into uncharted, enchanted territory, far beyond the kingdom of Arendelle. Of course, they're accompanied by beloved characters like Kristoff, Olaf, and Sven. The trailers show Elsa's power growing stronger as she practices new abilities, and she and her friends search for the source of her power.

Fans have heard bits of new songs to come in the movie trailers, like "Into The Unknown," Elsa's (Idina Menzel) sure-to-be smash hit following on the heels of "Let It Go." They've also seen snippets of the characters' new attire, which is sure to inspire future costumes for many kids, and they're pretty different from the last movie. And now, more musical and sartorial insight is available through Hasbro's singing Anna and Elsa fashion dolls.

The newly released Elsa doll rocks the royal's signature side braid, smirk, and dark lip. However, she's dressed in an all-new look fans have only seen glimpses of in the movie's trailers. Her long cape and sparkling gown with train are nowhere to be seen, replaced instead with a tea length dress and cape in a light blue hue and white boots. This outfit makes much more sense, considering the cross-country mission the sisters are on in this movie to discover the truth about Elsa's powers. No word on which song or songs the doll sings, but perhaps it's "Into The Unknown." Press a button on the bodice of her dress to find out, and watch as it lights up!

While you'll have to play with Anna in person to find out what she sings as well, she looks as radiant as ever in her usual deep color palette with Arendelle insignia. She's also sporting a cape and boots to protect her from the elements on her probably-at-least-a-little-hazardous journey with Elsa. Her red hair is styled in a half-up, half-down 'do, and her posable body makes her easy for children to move her around when playing.

Hasbro also released a set of both Anna and Elsa's singing dolls, a smiling Sven, and sled for $59.99 for kids who want to collect both sisters and their furry friend. Also not to be missed, check out the new Kristoff and Anna two-doll set featuring their outfits from Frozen 2. Both have never been seen before, and may even hint at the fact that the pair gets married in the sequel, since a white ensemble and formal updo aren't part of Anna's usual lewk. The dolls will be available at most major retailers and can also be purchased on Hasbro.com.