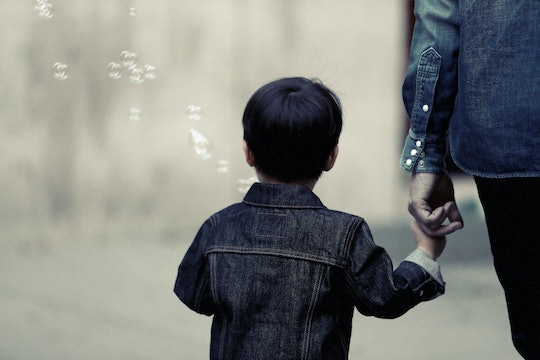 Single Mom's 'Donuts With Dad' Costume Is Important For This Reason

God, how I hated Father's Day as a kid. Who am I kidding, I still sort of hate it. I didn't know my own father as a kid, and back in the olden days it wasn't as common as one might think. So I would make my super lame/awesome clay ashtrays along with my friends and pretend. I was always pretending. As a single mom myself with four sons, I didn't want that for them. I was always trying to think of ways they could feel included, but I have to say this single mom's now-viral "Donuts With Dad" costume is truly inspired, and it's important for this reason: We teach our kids about showing up by showing up.

Yevette Vasquez of Forth Worth, Texas, dressed up in a mustache, ball-cap and traditionally masculine clothing recently so that she could participate in a local "Donuts With Dad" event with her son, Elijah. As Vasquez explained on Facebook:

Good morning, today at my son Elijah's skewl as I was dropping him off i ask him why there was so many cars... He said Donuts with Dad, so we quickly went back home cause I wasn't about to let him miss out..... I know seeing other dads with there kids isn't easy for mine but its life, at least I can do whatever it takes to put a smile on that face, so here it goes..... and please don't hate I know I'm a woman an so do my sons lol

While Vasquez told media outlet KDFW that she felt a little nervous about dressing up in a plaid shirt, baggy pants, and, oh yes — that amazing mustache to attend a school event with her son, she said that she has been showered with super positive response on social media. A few of those adoring comments:

What an amazing mother! I personally didn't grow up with a father so this truly brings tears to my eyes. God bless you Yevette[,] you're a great mother and your boys are truly blessed!

You are an amazing mom for doing this[.] I give you so much props [—] if I was in your situation I wouldn't know what to do but now that I see it took a strong woman like you to do better[.] Believe I'm gonna probably do it to[o] (: I love how us single mothers do what we gotta do to put a Smile in your kid (s) life no matter what it[.] Much love to you girl[.]

The reality is, there are simply far too many children being raised without their father as a presence in their lives. As of 2015, one in four children is being raised without a father in the United States. So how exactly are they meant to learn how to become good parents? Turns out Vasquez has that all figured out.

As Vasquez wrote on Facebook, "I know seeing other dads with their kids isn't easy for mine but it's life."

That, of course, was the best thing to do for her son. She showed up for him, even if it may have been a little tough or embarrassing or whatever. She taught him that a good parent shows up, no matter what. No matter what happens in their relationships, or what's going on with work, or how stressed out they are.

A parent shows up. Period.