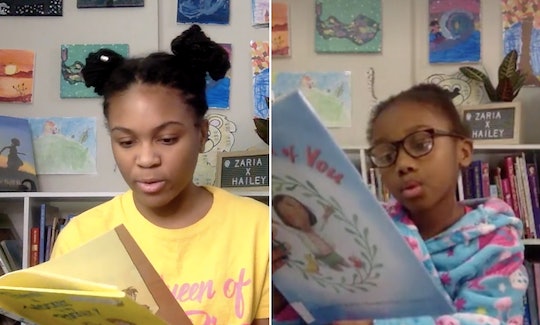 There are few things more precious in this world than a good bedtime story. Even as adults, many of us are still attached to the soothing cadence of someone reading us a story. Beyond the actual story itself, there's something almost meditative about the experience. Unfortunately, not every parent out there has the time or energy to read to their children every night — and that's where these two sweet sisters from Dover, Delaware come in. Zaria and Hailey Willard are two sisters who read bedtime stories for kids around the world every night via Facebook Live, because they want children to be able to fall asleep being read to just like they have been most of their lives.

Zaria, 13, and Hailey, 8, are big fans of reading after having been read to since they were babies by their own mom, Victoria, as they shared on Facebook, and that love of reading translated into a wonderful idea earlier this year. The girls decided they would read one book per night live on Facebook at a designated time so kids could have a bedtime story.

"Parents sometimes work late or are too tired for stories. We are not only helping children, we are giving parents a nice break after a long day of work," Zaria and Hailey write on their Facebook page.

It's safe to say most parents are well aware of the benefits of a good old bedtime story for their children; not only does it foster a strong sense of bonding, it also helps with language and cognitive skills, and encourages a love of reading that will hopefully carry children through life. And that's exactly how Zaria and Hailey initially came up with the idea to read to children — they already knew how much they loved it when their own mom read to them before bed.

Victoria Willard tells Romper that her girls were "giggling and talking in their room like usual" when they first came up with the brilliant idea. And when they took their idea to read bedtime stories to kids on social media to their mom, her initial response was "no way" for understandable reasons.

"I didn't want them on social media but they were persistent, they asked a million times," Victoria tells Romper. "I explained they would have to stay persistent. I told them I can’t stay dedicated to a workout schedule, you are going to have to do this every night. They are more dedicated than anyone I know."

Zaria and Hailey got started in February — reading classic stories such as Green Eggs & Ham, Go Dog Go, and Are You My Mother? — and at first it was slow going. A few people watching here and there, a few more after they were featured on a local television show. But Victoria tells Romper that "it didn’t matter to them if they have one viewer or 1,000, they just show up and do it."

It helps that both girls remain devoted readers who are especially fond of the Twintuition series by Tia Mowry. Even if no one is watching them read a bedtime story, they simply show up anyhow and assume someone might go back later to check it out.

And, really, it's no big surprise that the girls have really become a hit on social media. "What a wonderful idea you gals came up with! Keep it up!" one viewer commented on Facebook, while another wrote, "You are very sweet and generous young ladies!"

As they gain more and more viewers, Victoria remains strict about their presence on social media, but she tells Romper that her daughters have been excellent about following a strict set of rules for being online that include:

If you're interested in tuning in, according to their Facebook page, the girls read a book of their choosing to kids around 8 p.m. EST Monday through Friday, giving parents a bit of a much-needed break to prepare for bedtime.

The girls are also busy thinking about what they might like to do next. In fact, Victoria tells Romper that they are working on a series of children's books about what it's like to be in a blended military family from a child's perspective — leaving friends and homes they love as they as they move around the country. Zaria is also working on a financial literacy workbook for kids to help with practical skills like writing checks and how to manage yourself with a debit or credit card.

It was obviously a tough decision for Victoria to allow her children to dip their toe into the big, frightening, frequently unkind world of social media. But to see her daughters become a force for good, to know they were dedicated to reading to children all over the world as they drifted off to sleep, must surely have made all the difference to her.