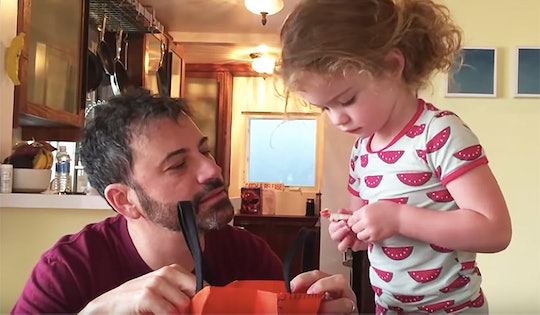 Need Some April Fools' Day Inspo? Check Out These Pranks Celebs Pulled On Their Kids

April Fools' Day can be a lot of fun, especially if you have children. But if you're lacking inspiration, time, and money, it can be daunting to come up with tricks for your kids. The good news? These celebrity parent pranks are super easy to use on your own kiddos, so get ready to take some notes.

Coming up with pranks to pull on your kids can be tough for a number of reasons. For starters, you don't want to potentially traumatize your child (jumping out of their bedroom closet probably isn't a good idea), and it can't be too elaborate that it goes over their head.

Although there are plenty of awesome April Fools' jokes out there that parents have already tried, why not look to Hollywood for inspiration this year? Late night host Jimmy Kimmel, for example, is the master of pulling pranks on kids. He created the fan favorite, "I Told My Kids I Ate All Their Halloween Candy" bit, and he has a few other tricks up his sleeve that you might want to take a crack at.

Who says you have to prank your own child to get in on the fun? Instead of playing a trick on your kid (no matter how tempting that might be), try teaming up with them instead. A great example is Neil Patrick Harris, who pulled off an Easter-themed prank with his twins, Gideon and Harper, in April 2017.

The video starts off with Harris and the twins holding up what appears to be a cute and seemingly ordinary stuffed bunny. "Happy Easter, everybody! We got this cute little Easter bunny, isn't he cute?" Harris captioned the clip.

But amid the trio's awws, the stuffed animal grows fangs and adopts a sinister expression. Trés creepy.

As it turns out, the toy is from the Feisty Pets line. You can buy one from Amazon for $19.99 a pop if you have Amazon Prime.

There's Never A Bad Time To "Eat" Your Child's Candy

Late night host Jimmy Kimmel pulls off the same prank every Halloween, and it has become one of his best bits. Here's how it works: Kimmel pretends to eat his kid's candy, and then he films their reaction for the world to see. After he has enough footage, Kimmel reveals that the candy in question is actually safe and sound.

Of course, this prank can be used at anytime of the year. Whether you gobble up your child's favorite snack or nab that last scoop of ice cream, there's something about this joke that never gets old.

That being said, try this out at your own risk. Cranky toddlers and missing food doesn't tend to mix well.

Dress Up In Costume A Lá Jennifer Garner

The lovely and hilarious Jennifer Garner is not short on enthusiasm, a trait she displayed in March when she donned a costume for her 7-year-old son's birthday party. Garner dressed up as Astrid from How to Train Your Dragon for the occasion, and while she didn't intend the getup as a prank, it got a hilarious reaction from her little man.

"Well, guess what. It turns out 7 is the age my kid stops thinking it’s cool when I dress up for the party," Garner joked.

If you have a costume lying around, this could be a fun prank to pull. Wake them up for school while in costume, or show up to daycare in a cute getup. And at the end of the day, the whole family can play dress up together for a cute activity. Get creative!

Mess With Your Kids' Screen Time At Your Own Risk

It's no secret some kids love their screen time. Someone who knows this all to well is Kimmel, who created a prank called, "Hey Jimmy Kimmel, I Turned Off the TV During Fortnite."

As the joke implies, the challenge is to surprise your child by turning off the television while they play Fortnite.

For a younger version of the game, try turning off your child's daily dose of Peppa Pig mid-episode, for example. I'm not sure how fun this will be (I'm imagining lots of tantrums will ensue), but the initial shocked and angry reaction might be worth it.

Teigen creating a fake restaurant for her daughter, Luna, isn't exactly a prank per say, but you could make it work. Imagine how surprised your child would be if you transformed your family's kitchen into a makeshift restaurant complete with a "menu" and "waitstaff."

Or if you want to trick your picky eater into gobbling up some grub, this is a creative "prank" to pull.

Remember when Kristen Bell talked about how her two daughters taped gum to chairs around their house? "Today my children have inexplicably decided to start taping loose pieces of gum to our chairs," she joked at the time.

A good idea for April Fools' Day? Play your child's favorite prank on them for a change. There's a good chance it will throw them for a loop.