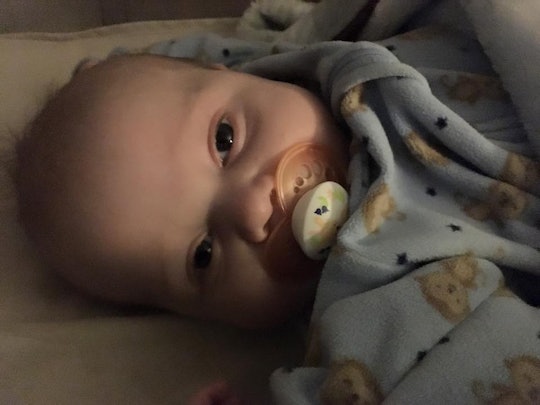 When Sleep Training Kills A Friendship

I used to judge the hell out of people who sleep trained their babies. I couldn’t imagine letting my baby "cry it out," and honestly wondered what kind of mother could. Turns out, the answer was me. I am the kind of mother who absolutely could sleep train her baby when she needed to. My youngest wouldn't fall or stay asleep unless he was touching me, and this so-called sleeping arrangement quickly impacted my mental health in the worst way. In the end, I decided to sleep train out of shear necessity.

That decision ended up being one of the best parenting decisions I have ever made, though. And I wanted to tell everyone about it. Why keep a sleep solution hidden from other parents who were probably just as exhausted as I had been, right? Well, not long after I shared my sleep training success did I find out why some things are best kept to ourselves: people were pissed. And by people, I mean a former friend of mine.

The decision to forego sleep training my older children seemed like the right choice at the time. Yes, it meant bedtime took hours, and involved me sleeping in bed with them or rocking them until they fell asleep, but I thought it was worth it. And sure, I had to wake up with my children multiple times a night, but as tired as I was, I worried that letting them cry it out — or cry at all, for that matter — would hurt them. So, for me, the loss of sleep was worth what I considered to be peace of mind.

I think part of the problem was that my friend group, at the time, was super crunchy. We said things like "motherhood is not for the weak" and "they’re only small once" and "I'm a mom 24 hours a day," as if moms who weren’t willing to give up their entire selves to motherhood weren’t "good mothers." You know, like we were.

We were catty about our parenting choices, too. So catty. We gossiped about moms we knew who sleep trained, like they were lesser moms who somehow loved their children less. We posted passive-aggressive memes about the so-called dangers of sleep-training on social media, and shared blog posts about co-sleeping being the superior method and choice.

Then, my youngest baby was born. My husband and I have five kids between the two of us, and have definitely mellowed out as far as our parenting choices and shared parenting headspace are concerned. And, of course, as parents who are learning as we go, our child-rearing philosophies have evolved, too. I went from a super granola-crunchy, "natural" parent, to a "do whatever the hell works, and try not to stress about it" parent.

I wasn't some random, no-named mom who made different parenting decisions than she did. I was a person she knew. How could she think that I would do something to endanger my child?

And, for me, that evolution meant incorporating sleep training.

When I realized that my son would only sleep if I held him, I quickly learned that I wasn't going to physically, mentally, or emotionally be able to sustain that kind of sleeping arrangement. Sure, it was fine for a while, and yes I loved the baby snuggles, but it all came at a cost. A cost I couldn't continue paying day after day, night after night.

As my son became more and more dependent on me to fall asleep, I knew something had to change. I was so tired I couldn’t sleep, eat, or function. It was hard to get any work done during the day, and I dreaded putting him to bed every single night. My mental health was crumbling, and I could feel the relationship I was cultivating with my newborn suffering. So, and despite my previous and steadfast objections, I decided to give sleep training a try.

It wasn't an easy decision, to be sure, and I found the process to be rather difficult, too. But after a few nights of listening to my baby cry, he seemed to get the hang of things and figured out how to fall asleep on his own. As a result, I was actually able to enjoy a few blocks of uninterrupted sleep each night. I couldn't believe it.

She told me that she could not believe I could be so cruel and "abusive."

Sleep training my baby was so revolutionary and beneficial, for me, that I wanted to sing its praises from a mountaintop. You know, like Julie Andrews in the Sound of Music. But when I posted about it on social media, one of my friends immediately commented with a link to an article about "the dangers of sleep training."

This reaction shouldn't have surprised me. After all, this was the same friend who would mock "lesser moms" with me just a few years ago. But I have to admit that I was blindsided. After all, she knew me. She knew what kind of mom I was. Our kids had grown up together. I wasn't some random, no-named mom who made different parenting decisions than she did. I was a person she knew. How could she think that I would do something to endanger my child? And why would she think a passive-aggressive comment would somehow make me change my mind?

I never thought it would happen, but I found myself on the other end of our shared judgment and blind condemnation of people who sleep trained their children. I messaged her, wondering if she was legitimately and genuinely worried about me or my baby, and why she couldn’t simply ask me about it, face to face, the next time we talked.

She told me that she could not believe I could be so cruel and "abusive."

You have to take care of yourself if you even have a hope of adequately taking care of a baby, and that means getting some damn sleep.

With a hot face, and tears in my eyes, I replied with a heartfelt message about how hurt I was. My feelings didn't matter to her at that point, though, and I guess that shouldn't have surprised me either. The feelings of all those parents we had shamed before didn't matter to either of us at the time, either. She outright said that I was hurting my son, claimed that the trauma of being left to cry even for a second would cause irreparable harm, and wrote me off as unfit.

I know the science behind sleep training, so I know that her claims were untrue. But I also knew that, for her, it was more important to be right than it was to be understanding, or to recognize that every baby and every family is different.

It was a difficult lesson for me to learn — one that required me to seriously and earnestly look back at the times when I had been narrow-minded and judgmental, too — but after sleep training my baby I realized that motherhood is not all about self-sacrifice. You have to take care of yourself if you even have a hope of adequately taking care of a baby, and that means getting some damn sleep.

Yes, they are only little once. Yes, it's important to take time to enjoy our babies. But for my family, and for my mental health, sleep training provided me with that time and opportunity. It gave me the chance to really enjoy being a mom to another newborn. And if it meant that, in the end, I had to lose a friend so I could be the best mother I could be, so be it.