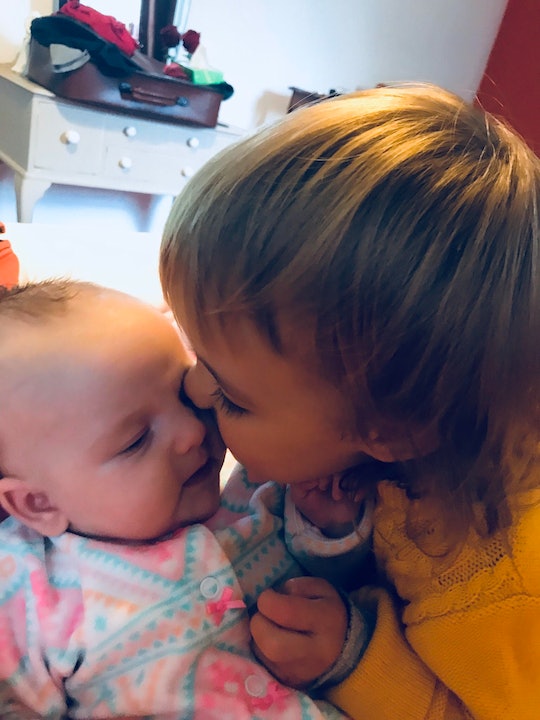 For 15 months after my eldest daughter's birth, I barely slept. I considered myself lucky on the nights when she didn't fuss for two hours in a row — but those nights were rare. More often than not, my baby awoke every hour on the dot. Even after her first birthday, she still wanted to nurse through to the morning hours. Sometimes she'd just want to play. Sometimes she'd cry, for no reason I could get my insomnia-riddled mind around. It was my partner who finally suggested we sleep-train our child in order to get her in her own room and get all of us a good night's sleep. We were both exhausted, on edge, anxious, moody, and often pretty ill as a result of parenthood-induced sleep deprivation, and I guess he knew something had to give.

In truth, I never wanted to sleep train. I'd heard too many horror stories. One mom friend said the pick-up put-down method made her son distrust her. She could feel that he was reluctant to cuddle in the daytime, like he was waiting for her to suddenly pull away.

I also knew someone who tried fading, but every time they made a move to leave their child's room, the kid would wake up and weep inconsolably. It made this particular parent feel like they were betraying their daughter.

I heard about babies who got so upset during sleep training that they vomited. Others started choking over their tears. Others refused to so much as look at their parents the next day.

I had even read about adults who claimed to remember being left to cry it out as babies. They blamed this "cruel" practice for their emotional issues later in life. They said it was their first recollection of parental selfishness. They said it made them feel wholly unloved — and that the feeling of being "unlovable" stuck with them forever.

When I first conceded to sleep training, we began by utilizing no-cry sleep solutions in an attempt to minimize any negative emotional impact our daughter, Luna, might experience. Nothing worked, though. Pick-up put-down seemed like one of the most promising methods, as it would still allow us to comfort Luna whenever she got distressed. That didn't work, either. It made us feel like we were teasing her with the thought of being together again, only to rip away all her hopes.

Crying it out was the only sleep training method left to try. My husband, desperate for everyone to have a better, healthier life, suggested we just go for it. It would undoubtedly be one of the most difficult things we'd ever have to do, he said, but it would be for the best.

As for me, baby-led weaning — a practice whereby you essentially operate on your kid's own timeline and instincts, whether we're talking sleep patterns, potty training, or eating — had always been my preferred parenting method (it still is, for the most part). I love the idea of cultivating independence by working to your child's unique sense of self instead of imposing things they may or may not be ready for.

So, I was reluctant to sleep train. I was especially reluctant to cry it out. If my daughter was sobbing for minutes, or hours, on end, surely something was wrong. Surely we were doing the wrong thing.

I chastised my partner for putting us through this. I cried. I told him that he was wrong.

I was reluctant to listen to my husband, too, perhaps in part because (like so many people) I believed that mothers always know best; that the bond between a mother and her child is the deepest, most surreal, most inexplicable thing. I fought him on cry it out every step of the way, until the morning I woke up at 7 a.m. having slept an uninterrupted eight hours.

The first night of the cry-it-out method was, indeed, the worst night of our lives (at least, since becoming parents). We gave Luna a final bottle, as we did every evening, only this night we transferred her to her own room afterwards. Until that point, she had always slept with us. Any attempt at sleeping in her own room was met with resistance.

She didn't take well to this, of course. We had tried all of the other methods, though, including ones where you slowly increase the amount of time you leave the child crying. Since nothing had worked, though, my husband was sure we just needed to try leaving her to it.

We kept the baby monitor on so that we could see any signs of genuine disaster, but turned the volume off. We didn't need it on. We could hear her crying through the whole house. I chastised my partner for putting us through this. I cried. I told him that he was wrong. I was still fighting him, and fighting myself for agreeing to something I never even believed in.

This went on for over an hour. Maybe for two. It went on for so long that I didn't even realize Luna had stopped crying. When we finally looked at the monitor, she was asleep.

That wasn't the end of it, unfortunately. A couple of hours later, Luna began crying again. We could see her frustration through the baby monitor, and it took everything in us not to go comfort her immediately. Crying it out felt like an assault on every natural maternal instinct inside me. I still couldn't believe we were doing this. From the look of sadness on my husband's face, I knew he was feeling the same.

This time, however, she cried for less than an hour. Then she was asleep again. She stayed asleep until her usual waking time, around 7 a.m.

I still didn't want to call it a win. She'd cried for a total amount of three hours, approximately, and I wasn't sure I could handle putting her through that anymore. I told my husband we could try again that evening, but that if she was still as upset as she had been, we'd need to explore another method. Maybe we'd just need to adjust to the idea of her being in our room for a little while longer.

On this second night, Luna drank her bottle as she always does. We transferred her to her room, and I was fully expecting her to wail once more. Instead, she rolled onto her tummy and fell asleep quickly.

It was never the studies or the statistics that made me skeptical of the method, though. Rather, it was that my instinct told me I should never leave my baby in distress.

My husband and I started watching TV, not wanting to commit to going to bed in case she woke up soon after. I don't know how long we watched for, but when the crying hadn't yet started after a few hours, we thought we'd try to rest. Before I knew it, I was waking up to sunlight streaming through the curtains. It was the first time in so long that a child's screams hadn't punctured my night. I flipped my phone around, only to realize it was morning. Luna had slept through.

She kept sleeping through, from that point on. She still is, over a year later. We are closer now than ever.

There is still "debate" around the science of cry it out. Some researchers, operating on "basic assumptions" about Western culture's departure from the "evolved developmental niche" (essentially: we never should have left the hunter-gatherer society) suggest that cry it out harms your child's sense of security and fosters a distrustful relationship between parent and kid. Meanwhile, pediatricians point to flaws in studies cited by opponents of cry it out, and point to the wealth of literature that shows cry it out will not affect your baby's attachment, and will, rather, improve health outcomes for both mom and baby. It might even help fuel the independence so many of us want to instill in our children.

It was never the studies or the statistics that made me skeptical of the method, though. Rather, it was that my instinct told me I should never leave my baby in distress. My instinct told me that leaving my baby to cry was cold-hearted at best and dangerous at worst. And a mother's instinct is paramount, right?

Even though I have always believed my husband is one of the best fathers I've ever encountered, it was difficult to come to terms with the idea that he might know something I didn't. I never would have admitted it at the time, but I did consider myself the authority on all things child-related in the household.

For the most part, our cultures teach us that women have natural child-rearing abilities. We are programmed to know how to do it, and do it well. It isn't a "man's job" to know what's best for our babies. (Never mind that the cherished hunter-gatherer society saw women co-parenting and cross-nursing babies, rather than doing it all themselves.) These were messages I'd internalized, no matter how "feminist" or "progressive" I had long prided myself on being. Maybe, as a feminist and progressive person, I was also fighting an instinct that told me I shouldn't let a man question my beliefs.

Looking back, though, there's no way to deny that my partner did know best. He has his own set of parental instincts, and his told him that this method was one of the only things left to try. That, maybe, it would save us.

And it did. Until my second daughter's birth, we continued to enjoy the luxury that is sleeping through the night. We were more energized, present parents than we had ever been. Luna was better rested, and happier as a result, than she had ever been. She never once seemed to hate us for sleep training. Even on the morning after our first cry it out session, she reached out her arms with a smile on her face as she had always done. In no time, our anxiety reduced. Our dispositions were brighter. We no longer felt that we were in a constant state of drowning.

Though this experience, I also learned a valuable lesson. One I perhaps should've known all along: My husband and I are in this together. And when I don't listen, or value his opinions, or engage in an honest dialogue, I only help fuel all those constructs that suggest fathers should be hands-off parental figures. That they couldn't possibly share in all of the responsibilities. That we're screaming through it alone, when that just isn't the case.