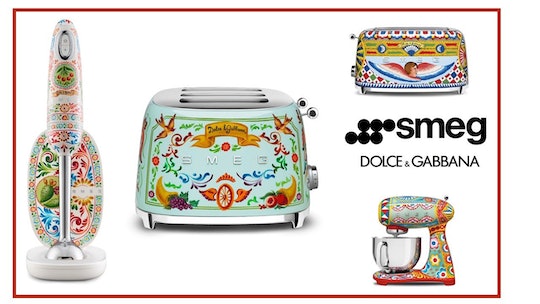 So sometimes it's not all that fun to cook. I say this as an obsessive watcher of any cooking show I can get my hand on, which I know is a bit of an oxymoron but hear me out. The thing is, when you go in your kitchen and your appliances are all boring and sort of half-functional like mine, it's not exactly inspiring is it? Not like SMEG's collaboration with Dolce and Gabbana for small kitchen appliances. They're basically like couture for the kitchen, except I don't have to look any particular way to enjoy them so I think this is a smashing idea.

The Italian designers Domenico Dolce and Stefano Gabbana have long been synonymous with high end fashion as well as a deep and abiding love for their own heritage. Which could be why they began a small kitchen appliance collaboration with SMEG, an Italian company creating high end accessories for your kitchen that apparently needed a touch of something extra special in 2017. What kind of special, you're wondering? Oh, think hand-painted toasters and refrigerators, citrus juicers and espresso machines in cheerful motifs inspired by the colors of Sicily. As Dolce explained to Vogue in 2017, "Every piece is unique, but they all tell a story consistent with our brand identity. They might be kitchen appliances, but there’s something that is immediately identifiable as Dolce & Gabbana, from the Sicilian barrows to the Trinacria symbol to the marionettes to the Italian lemons and fruits.”

This season, Dolce & Gabbana have added some gorgeous, whimsical new items to their collection. Like this stand mixer, which is all about a beautiful blend (get it?) of "mid-century design and decorative interpretations of Sicilian folklore," as per a press release shared with Romper. The stand mixer features a stainless steel bowl, 10 adjustable speeds, and even a dough hook. Also I bet you could find a pretty dress and an apron and you could just stand beside it taking pictures.

It is really annoying to get stuck making the toast for a bunch of people because it takes forever. Fortunately this won't be a problem with Dolce and Gabbana's 4-slice toaster. Not only because it makes four pieces of toast at a time and this is very handy, but also because this toaster is covered with beautiful motifs inspired by terracotta pots of Sicily.

Those morning smoothies are going to feel like way more of a treat if you're blending them with this new hand blender. And the bonus is it's actually functional beyond being beautiful; you can even chop vegetables with it. It'll become available soon, for spring 2019.

This toaster will look awfully pretty sitting out on your counter. Forgot to pull bread or bagels out of the freezer the night before and looking for a last-minute breakfast? No problem. Since it can toast four slices of bread or two bagels at once — it even has a setting for defrosting — it means that breakfast is a total breeze. The 4-Slice Toaster will be available for purchase later this year.

The prices aren't exactly on the low end, as I'm sure you can imagine. Just to give you an idea, a Dolce & Gabbana x SMEG fridge retails for around $50,000 at Neiman Marcus. But here's the very good news; after only being available in Europe initially, all of these items are now available — or soon to be — in the United States. And you can get the smaller items for a lot less than $50,000, which means you can feel like a super impressive fashionista but still pay your rent.

More Like This
AAP Says Kids Will Face "Grave Consequences" Now That Roe V. Wade Is Overturned
You Can Schedule Your Kid’s Covid Vaccine Appointment At Walmart
WowWee’s New Fairy Finders Will Keep Kids Distracted For Hours
Why Babies Love Water, According To Experts