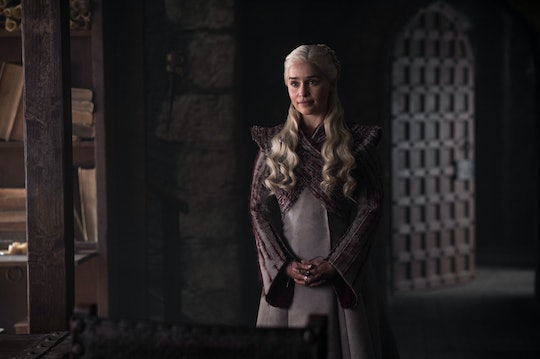 The second episode of Game of Thrones' final season was positively apocalyptic as characters learned the Battle of Winterfell was just one night away. But a heart-to-heart convo between Sansa and Daenerys actually served up the episode's most meme-able moment. Smiling Daenerys memes from Game of Thrones became an instant classic, as a split-second shot of her pained expression captured so many relatable feelings. "Caption this" screenshots got tweeted out almost immediately and the responses came flooding in.

The moment occurred during a scene between the Mother of Dragons and her once-believed potential future sister-in-law. Things had been icy between the pair ever since Daenerys first arrived at Winterfell and Sansa swiftly put together that Jon Snow was completely in love with her. But Sansa's issues run deeper than run-of-the-mill jealousy over a new woman in her brother's life (not really her brother but she doesn't know that yet). She knows Jon has to focus on preventing the end of the world right now and she's understandably freaked out that a new love interest might distract him. "Men do stupid things for women," Sansa flatly says in the scene. "They're easily manipulated."

Daenerys starts to make some headway in gaining her trust, but when Sansa cunningly inquires after Dany's intentions in the North, the Dragon Queen is clearly caught off-guard. Hence, the face that launched a thousand memes:

Her expression is a perfect blend of condescension and forced politeness, which makes it the perfect reaction for everything from extremely irritating retail/service industry encounters to casual workplace racism and sexism. It's truly universal. Unfortunately, she doesn't handle the rest of the scene much better, and Sansa comes out looking a lot more sympathetic than her presumptive queen.

Like the rest of her beloved Northerners (and even Jon Snow), Sansa doesn't much care who sits on the Iron Throne, as long as she isn't beholden to whatever ruler presides in King's Landing. Northerners would very much like to be excluded from the narrative, in fact, and are perfectly happy to secede from the union and do their own thing. Sadly, Dany has one goal and one goal only, and that's to rule the Seven Kingdoms — a position she believes is her birthright.

As plenty of people on Twitter pointed out, Daenerys' behavior comes off as petty mean girl nonsense, and it's pretty divorced from her motivation in the books. In the A Song of Ice and Fire series, Dany's attachment to sitting on the Iron Throne is about her desire to return home safely. It's not necessarily about her desire for power.

Daenerys spends her conversation with Sansa focused on herself, her goals, and her power. Sansa is the one who's actually concerned for and looking out for her people — despite Dany's insistence that she's a ruler of the people. It's not a great look, and it underscores that Daenerys isn't the best at forming female friendships. Her closest female friends are her servants, like Missandei, or her allies with capital, like Yara Greyjoy. When it comes to leveling with Sansa, Daenerys winds up on the bottom.