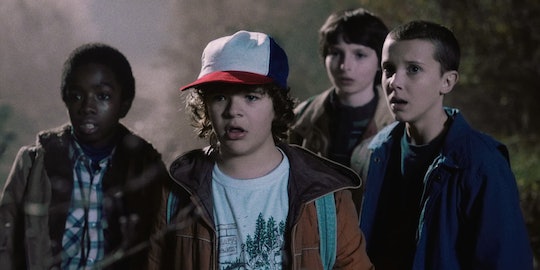 It was only a matter of time before Saturday Night Live took a stab at the newest Netflix hit, Stranger Things, and all of the aspects of the show that we, as fans, seem to overlook because all of the best parts outweigh them and we'd all rather suspend our collective disbelief. SNL's Stranger Things parody said everything we've all thought at some point but have been too afraid to say, for fear of offending that one friend we all have who is already a Stranger Things super fan. And yes, we all know at least one at this point.

When SNL's Stranger Things parody skit said what we've all thought about different aspects of the Netflix thriller series, it touched on some of the more important things that went either unnoticed or ignored as everyone watching the first season tried to understand the upside down and Eleven's obsession with frozen waffles. Like, where are Lucas's parents in all of this? We've seen almost all of the parents of the group of kids with way too much freedom, but Lucas is somehow this member of the group who shows up to tell it like it is and then rides off into the sunset at the end of the day, with no mention of his family life.

In the Stranger Things parody on SNL, we finally meet Lucas's parents and they're quick to point out the insanity of Will's mom and how no one seems particularly bothered by her attachment to the Christmas lights, regardless of what she claims they tell her. And in response to Lucas telling them that they need to rescue their friend from the upside down, his mom gives him a classic, "Boy, I will beat your upside down." Also when they point out the fact that Eleven kind of looks like a little boy, easily, much more so than the show makes it seem, as they ask, "Who is this creepy woods dude?"

In Stranger Things, we accept Will's mom, who is driven by the legit supernatural forces that enable her to talk to her son while making her appear totally crazy, and we are all behind the chief of police just hanging out with this group of school kids on the regular, but let's be real. It's not normal, and SNL's Stranger Things parody pointed it all out for us, forcing us to face the facts that as great of a Netflix show as it already is, it can sometimes be utterly ridiculous. But if nothing else, the skit just further proved that if you take Kate McKinnon and tell her to impersonate anyone in the world, she can do it better than the person she's pretending to be.