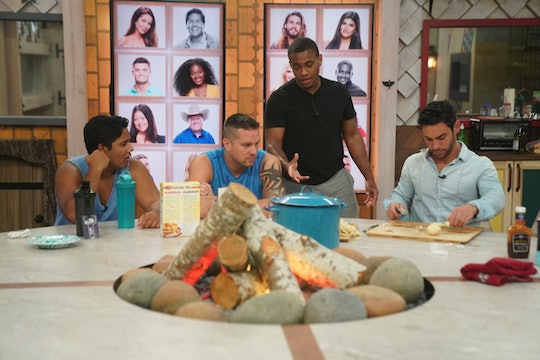 Is it just me or does week three of Big Brother 21 feel more like week 13 at least? These houseguests act like they have been in the game for months rather than days and the alliances are too strong for their own good. It’s only a matter of time before they start to crack, but first, Camp Comeback has to run its course. Unfortunately, the diversity of the cast isn't reflected in the offshoot of players and there are no white people in Camp Comeback on Big Brother. Clearly, that’s a problem.

Right now, there are only two players who have been unlucky enough to be sent to the have-not style room upstairs in the Big Brother house — Ovi and David. But the next guest who will be voted out and sent to Camp Comeback with either be Kemi or Jessica, and both players are women of color. Big Brother producers have no control over who the houseguests target or vote against, but it’s not a good look for the show to have all people of color in Camp Comeback, eventually fighting each other for the chance to get back in the Big Brother game.

In past seasons, there were unexpected Battle Back competitions that saw two or more formerly eliminated players compete against each other to get back in the game. In those instances, the houseguests were put in sequester until the competition came. This time, the first four players eliminated from the house have to sleep in the uncomfortable quarters of Camp Comeback and refrain from playing any game-related competitions. They even have to remain in their room during Head of Household and Veto competitions.

As it currently stands, Ovi and David will soon be joined by another houseguest who is a person of color and who was nominated by another white Head of Household. Once fans realized how Camp Comeback is shaping up, they were quick to point out on Twitter how problematic it is, with David getting a raw deal as the first houseguest sent packing and Ovi being targeted by the majority alliance.

The Big Brother cast has been questionable even before Camp Comeback was starting to look empty of any white houseguests. Both Jack and Jackson have already been called out by fans for using derogatory terms against some of the other houseguests. Fans heard Jack refer to Jessics as "Consuela" on the Big Brother live feeds and called Ovi a "brown flame." Another time this season, Jackson made a comment about Kemi being "a cancer" on the Big Brother house despite there being no real animosity between them otherwise. Jack echoed Jackson’s sentiments about Kemi and at one point said, "God, dude, she gets me so hyped." And not in a good way.

It also didn't help that when Jackson was the camp director, he chose three people of color and the oldest houseguest to play in the competition wherein one of them would be automatically eliminated from the game. This only added fuel to the fire that some fans have felt burning in them as things become less evenly structured in terms of power in the Big Brother house.

The Big Brother cast is diverse this season, but somehow people of color have found themselves in questionable positions that have caused fans to worry about their futures in the house. And with no white people in Camp Comeback, it continues to be an issue among some fans. Even if the fourth and final houseguest who is sent to Camp Comeback is white, that leaves the majority of the outcast group being people of color and it’s a big problem.