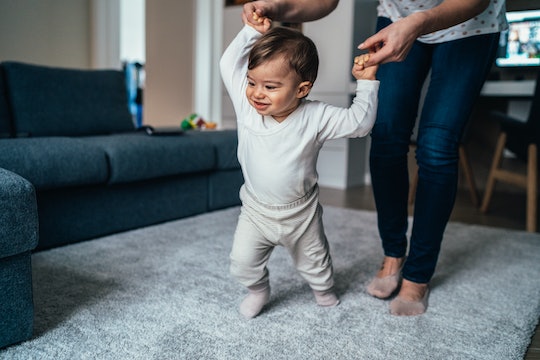 One day baby is totally dependent on you to get from point A to point B. The next day those tiny hands and feet are on the floor scooting their little bodies across. It's an exciting milestone, but some babies skip it altogether. When babies skip crawling and go straight to walking, what exactly does it mean? Perhaps a child prodigy or a future scholarship-winning athlete?

Not so fast. Pediatricians agree that some babies just never crawl — and that's that. Dr. Gina Posner, M.D., a board-certified pediatrician at MemorialCare Orange Coast Medical Center in Fountain Valley, California, says, “Usually they will have some sort of scooting or other way to get around before they walk, but some never crawl," adding that every child checks off their motor-skill milestones differently. "Kids that walk first are not more special than kids that crawl first."

“This usually just means they figured out their balance and how to walk and skipped one developmental milestone but progressed to another,” Dr. Danelle Fisher, M.D., pediatrician and vice chair of pediatrics at Providence Saint John’s Health Center in Santa Monica, California, tells Romper.

Crawling feels like a natural first step before walking, but some little ones just don’t like the feeling of the ground on their knees or are just interested in walking, according to Fisher. She says there's even a bright side to this behavior: when your child skips crawling, there’s less of a chance for them to injure their knees.

Posner says that former pediatric development theories believed that if a child skipped crawling they'd have developmental issues later. Both doctors agree that this simply isn’t true. Posner says it’s an old theory and that there are many children without developmental problems that have never crawled. “The concern about learning problems later would only be valid if they are delayed in many other milestones," Fisher says. "For instance, if they are having problems with language and social skills and fine motor skills, then I would be concerned."

So while some kids do go straight to walking and skip the crawling phase, it doesn't mean much beyond the fact that sometimes kids do what they want. Like with all of their milestones and development, all kids are different. If your baby happens to be one who skips crawling though, you can be thankful that you probably won't have to replace as many worn-out-in-the-knees pants.

More Like This
12 Genius Floats With Canopies (& Cupholders), So You Never Have To Leave The Pool
These Darling Baby Boy Names All Start With The Letter "D"
Here’s What You Need To Know About That Viral 1960s Baby Formula “Recipe”
The 21 Most Popular Baby Names Of 2021 In The U.S.