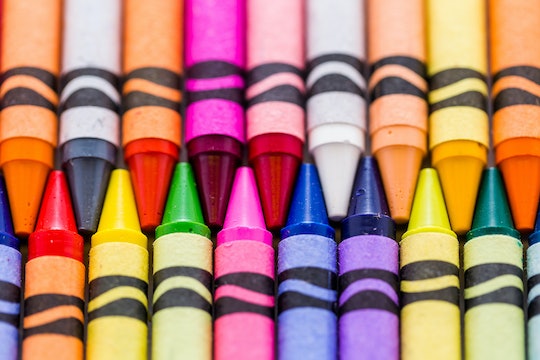 Now that August has arrived, plenty of parents are starting to think about buying school supplies. The summer is winding down and department stores everywhere are stocking up on backpacks, paper, pencil cases and the rest in preparation for the onslaught of parents armed with lists for school. This year, though, parents might want to be a little extra cautious about one seemingly innocuous item on their list; crayons. A new report found that some crayons might contain asbestos, and here's what you need to know.

The U.S. Public Interest Research Group Education Fund is asking online retailers the Dollar Tree to discontinue sales of Playskool crayons after the crayons tested positive for asbestos, according to the Chicago Tribune. For those who don't know, asbestos is a mineral that can cause cancer that can also cause breathing problems and long term health issues if exposure continues, according to the National Cancer Institute.

The public interest group recently tested 36 packs of Playskool crayons and found that they tested positive for asbestos, according to ABC News, which reported that Playskool crayons are manufactured by Hasbro and sold at Dollar Tree and online retailers such as Amazon.com, eBay, and DollarDays.com.

Romper's request for comment from Hasbro and Dollar Tree were not immediately returned.

Product and children’s safety are top priorities for Hasbro. We are conducting a thorough investigation into these claims, including working with Leap Year, the licensee of the product.

The safety of our customers and associates is our top priority. Our company utilizes a very stringent and independent testing program to ensure our supplier products meet or exceed all safety and legal standards. We are aware of the report and have since re-verified that each of the listed products successfully passed inspection and testing.

Now before parents start to really panic, it's important to note a few things. First of all, only the green crayons tested positive for trace amounts of tremolite, a type of asbestos fiber, according to CBS News. And while asbestos exposure can cause serious problems, the National Cancer Institute noted that people are exposed to low levels of asbestos on a daily basis. "Everyone is exposed to asbestos at some time during their life. Low levels of asbestos are present in the air, water, and soil," according to the National Cancer Institute, which added that most people "do not become ill from their exposure."

That being said, the U.S. Public Interest Research Group Foundation tested six different kinds of crayons, according to the report, and only the Playskool brand tested positive for asbestos, which Research Group Foundation toxics director Kara Cook-Schultz, who tests school supplies and toys annually for toxic materials, told CBS News is a considerable improvement from previous years. "The good news is that when we were testing three years ago, all sorts of brands came back with asbestos. Now it's just this one," she told the news outlet.

While it's a positive step in the right direction to see only one type of crayon test positive for asbestos, Cook-Schultz went on to point out to ABC News that there really shouldn't be any asbestos in any crayon at this point. "It’s completely unnecessary for crayons to contain asbestos," she told ABC News. "We know how to produce crayons without asbestos and most crayons are free of asbestos."

The U.S. Consumer Product Safety Commission told ABC News that it remained unclear whether the levels of asbestos found in the tested crayons was dangerous or not, but is still advising parents that they might want to avoid buying Playskool crayons until further testing can be done. CPSC director of communications Scott Wolfson told CNN:

Child safety is of the utmost importance to CPSC, and we have looked into the issue of asbestos in crayons and possibly being in fingerprint kits in the past. The agency has advised manufacturers in the past to not use any chemicals or any materials that could put a child's health at risk. And we will once again look at the products that have been identified in this new report.

Even if the crayons only carry trace amounts of asbestos, kids still tend to put them, or anything, in their mouths when they're young. With all this said, it's better to err on the side of caution until more testing can be done.