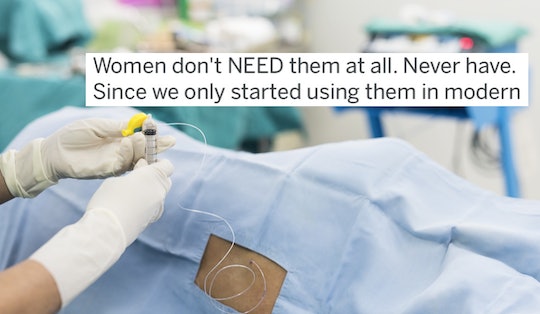 I have had four babies in my lifetime. Four large babies; each weighed over 9 pounds at birth. And while I'm not one of those moms who likes to scare pregnant women by telling them how much labor pains hurt... yeah. It's no picnic. But do you know what made it a whole hell of a lot easier? The blessed, blessed epidural needle. Never in my life have I wanted someone to stick a needle in my spine as badly as I did during labor. But now there's this guy online spouting off about how women "don't need" epidurals. Because he was in the room with his wife when she gave birth, and therefore is an expert, of course.

Writer Nicole Cliffe tweeted a screenshot of a post by an unnamed father of two who thought it would be a good idea to share his feelings about whether women really need an epidural. His wife didn't have one, you see, so this guy's got the corner on the epidural market. Despite never having witnessed one. The origin of the post is unknown, but PopSugar noted that it comes from a Reddit thread.

"Personal Opinion: My wife gave birth to two babies, 9 lb 10 oz (10 hrs of labor) and 8 lb 6 oz (only 2 hrs for the second baby). No epidural. Women don't NEED them at all. Never have. Since we only started using them in modern medicine. But hey, what do I know. I'm just a dude who held her hand through it twice," he wrote.

Here's hoping this guy doesn't join his wife for her next pap smear, because then he'll know everything about those and we'll all be subjected to another condescending post where he mansplains our lady bits.

Thankfully, the good folks on Twitter shut this guy down right quick. And I'm pleased to report, many of the comments came from other men, who could clearly explain a little something called self-awareness to this guy.

Then... the women got involved. Mothers who have either had epidurals themselves or support another woman's right to use modern medicine to alleviate some of the excruciating pain of launching a whole human being into the world. While it's incredibly irritating to read some dude's opinion on epidurals, it's actually encouraging to see women supporting each other's decisions.

The Centers for Disease Control and Prevention reports that around 61 percent of women give birth with the aid of an epidural, and yet there are plenty of women who beat themselves (and each other) up for not giving birth "naturally." It turns out, the one thing moms needed to find unity was some sanctimonious dad to tell us all not to have epidurals.

And the ladies got especially creative with their responses.

So here's the bad news; despite the fact that modern medicine now allows women to give birth with less pain (and let's remember that an epidural doesn't necessarily take away all of the pain here), there seems to be at least one actual human who thinks it's not needed. Like getting extra bacon on your cheeseburger; an optional topping that you probably don't really need.

But then there are plenty of other people out there who are like, epidurals are my jam. And even if they're not your jam, you celebrate and support a woman's right to have access to pain reduction tools like epidurals, on account of it's 2018 and not the dark ages.

As for the guy who is just so proud of his wife for not having an epidural, you need to stop. I'm really hoping you didn't actually stop your wife from having an epidural so you could have these weird bragging rights that literally nobody cares about.

Get it together, man.