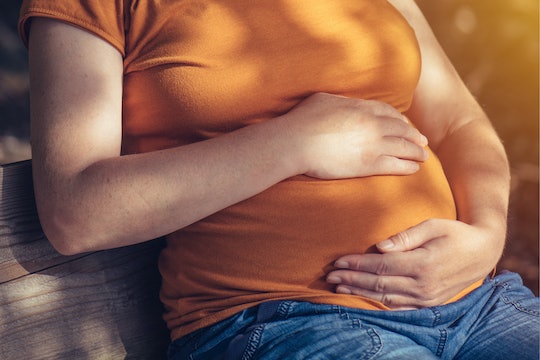 A case of misinformation in Britain over the weekend has reignited the debate over a term that most of us have never thought about twice: "pregnant women." After all, women get pregnant all the time, and when one does, she's called a "pregnant woman," right? But some people are torn about the term "pregnant women," and the reason some push back against the constant, unthinking marriage of these two words actually makes a lot of sense. It's a politically and emotionally charged issue, and it's obvious that people will continue to refer to "pregnant women" as they always have for a long, long time to come. But it's still important to consider the perspective that doing so could exclude transgender and intersex men, and nonbinary people, who also get pregnant.

Over the weekend, there were reports that Britain's government urged the United Nations to change the wording in a treaty so that it would refer to "pregnant people" instead of "pregnant women" in order to be more inclusive. On Monday, The Guardian corrected the record, quoting an unnamed Foreign Office spokesperson as saying that "[t]he UK does not object to the use of the term 'pregnant woman.'" The spokeswoman also denied that the Foreign Office has asked for the wording in the International Covenant on Civil and Political Rights — which currently states that "pregnant women" should not be subjected to the death penalty — be changed.

Still, the government's clarification did not dampen the charged feelings on both sides of the "pregnant women" controversy. There are some people who feel as though changing the way we talk about pregnancy in terms of gender to be more inclusive equals progress. Others believe that removing women from the conversation about pregnancy is a blow to feminists' ability to advocate for women's rights. And then, of course, there's the conservative camp of those who believe that people assigned male at birth are men and people assigned female at birth are women, and that anyone who can get pregnant is a woman, and that's that.

But there is, of course, much more nuance among people and their gender identities than that. So, in January, the British Medical Association took the somewhat extraordinary step of recommending that those who are preparing to welcome a baby be called "pregnant people," instead of "expectant mothers." Many who understand that recognizing gender nonconforming people doesn't mean getting rid of the term entirely, but just changing our use of it in some instances, hailed the BMA's move. Others, of course, totally rejected it with messages of transphobia.

Heather Ashton, who is the CEO of the transgender support group TG Pals, welcomed the change, as she told The Telegraph:

We know that biological females are the pregnant ones but trans people are parents too, and this is massive step forward to prevent discrimination against them. The fact that the terminology is changing can only be a positive thing for everyone who wants to be a parent and has the right to be a parent.

On the other had, the idea of separating womanhood and pregnancy in public discourse rankles some who consider keeping these entwined an essential tenet of advocating for women's rights. In a 2015 piece for the New Statesman, Victoria Smith argued that shifting toward gender neutrality when talking about pregnancy downplays all the ways "female bodies are controlled." The challenge, the self-described feminist mom wrote, "concerns whether all pregnant individuals are seen as people, not whether all pregnant people are seen as women."

So, the issue here is one of erasure, but the question of who should be removed from public discourse remains. Referring to "pregnant women" is intuitive for most of us, as natural as breathing. But carrying on as though is it only women who get pregnant ignores the reality of people such as Trystan Reese, a trans dad who recently gave birth to a son. Reese was never a pregnant woman, but certainly was a pregnant person.

The concern persists, though, that neutralizing the language to accommodate a wider diversity of life experiences could shift the focus from all the ways that society sleights women specifically. Those who subscribe to Smith's school of thought believe that it's easier to dismiss misogyny in society if issues related to pregnancy are rebranded as relating to all humans, as opposed to women specifically.

It's important to remember, though, that gender nonconforming people face just as much — and probably much more — stigma and discrimination as cisgender women. It's not exactly constructive to pit gender nonconforming people and cis women up against each another. Members of both groups can and do experience pregnancy, and updating language to reflect that is a good first step in promoting acceptance for all.

Parsing through such questions is a gargantuan and sensitive task, and it's unlikely that there will ever be one answer that will satisfy everyone. Remembering to be empathetic to a whole range of life experiences helps, as does keeping an open mind and considering that anyone who is or every has been pregnant faced challenges that were both universal and deeply personal.