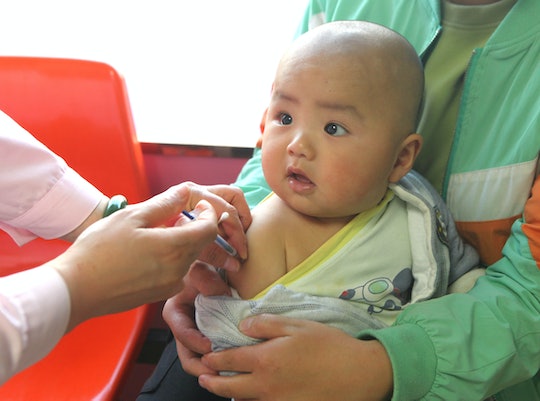 How Anti-Vaxxers Are Thinking About The Pandemic — & Why It Matters

In Lowville, New York, Jessica Zehr just completed her nursing degree. Mother to twin 5-year-old boys, one of whom has Down syndrome, and wife to Elias, who is three years post-lung transplant, she has spent a great deal of time making medical decisions in her life. She also has no plans to vaccinate her family against COVID-19. Vaccine-cautious in general, she has never felt fully “at peace” with the process. Her boys were vaccinated on an altered schedule. Knowing her husband is high risk complicates the decision. “I feel like I am always pinning the boys’ neurological health against his physical health when it comes to vaccines.”

Zehr is just one of a growing number of parents who are either quietly — or vocally — voicing resistance to the probability of a COVID-19 vaccine in the near future. As groups congregate across the nation to protest stay-at-home orders, they have been joined by an unlikely coalition — the anti-vaccination movement. From California to New York, anti-vaccination parents are vocally opposing both the stay-at-home-orders and the idea of a COVID-19 vaccine.

How are these two ideas linked? Freedom. In the middle of a worldwide pandemic, people are worried about their loss of freedoms. Freedom to eat out, to run their business, to have a say on what is injected into their body. The rapid spread of the pandemic has revealed a shortfall of both investment in scientific institutions and public trust in science, resulting in a population more vulnerable to the virus and yet more likely to reject measures that might protect them from it.

Dr. Sharon Kaufman, Ph.D., professor emerita of medical anthropology at the University of California in San Francisco, has been observing vaccine doubt for decades. Since the first now-disproven study in 1998 attempted to link autism to the MMR vaccine, she has watched with horror the erosion of trust in the scientific community. When her own two children were babies in the ‘70s and ‘80s, there was no question about vaccines, or other science-based recommendations. She believed her doctor, and she trusted the parenting bible, Dr. Spock’s Baby and Child Care.

There is now a broad disregard for what vaccines have done in the world.

Now, “doubt and mistrust are the norm,” as an individualistic approach to parenting and knowledge has taken hold. “There is this feeling that you can't figure anything out without doing your own research," explains Kaufman. "And it’s been joined by these other phenomenons of ‘truth’ and ‘knowledge.’ People are questioning, ‘What constitutes science?’ There is now a broad disregard for what vaccines have done in the world.”

Opposition to vaccines has seen inoculation rates fall below the levels needed to provide herd immunity in recent years. Professionals are struggling to find the right way to reach these parents, especially given how short most medical visits are.

Stephanie Lane of Zelienople, Pennsylvania, is the mother to two boys aged 3 and 6. She says they were diagnosed with autism two years ago following a round of routine vaccines at 18 months and 4 years old, and expresses the exact doubt that Kaufman fears. When she noticed her boys regressing developmentally, she felt her doctor failed to hear her concerns for her children. Her trust faltered in the medical system. She hasn’t taken her children to a doctor in two years aside from one sick visit, and has been instead seeking advice on healing their autism from largely online connections she has made. “I found parents who had recovered their kids [from autism] and also experts — not necessarily doctors — who found things to heal the body. I find the most controversial people are where you find the best information,” she says.

Lane trusts Judy Mikovits, the virologist at the center of the recently released Plandemic video who claimed that face masks could be responsible for “activating” the novel coronavirus. (Mikovitz admitted confusion around the contents of the Plandemic video to a ProPublica reporter). "I know her brother personally,” says Lane. “She is the biggest threat to the truth about the corruption in the CDC and Fauci."

“Pandemics don't create new problems, they amplify existing problems,” says University of Denver sociologist Dr. Jennifer Reich, Ph.D., author of Calling the Shots: Why Parents Reject Vaccines, who examines exactly these types of controversies and fears in her work. It is not a surprise to her that COVID-19 has ramped up talk of vaccine safety, particularly when the average American already feels uncertain about the future in general.

Upheaval from the pandemic has seen a resurgence of anti-establishment thinking, “questions about public health systems, the role of government, what constitutes a ‘fact’ or an ‘expert,’ and what is the role of for-profit companies in our health?” Reich has seen a push to sell parents on the role of personal responsibility — if they can just control their children's nutrition, activity, and education, they will be successful as mothers. A new fast-tracked vaccine upsets that sense of control. “Risk is always a process of perception,” she explains. The parents currently raising young children are too young to remember the polio epidemic, “they don’t remember the time before a measles vaccine.” And they feel the threat is far removed today: a recent poll by Business Insider found only 12% of Americans know someone who has died from COVID-19.

“I don’t blame parents for not wanting to be early adopters of a new vaccine,” says Reich, "but I am thankful for those that want to be part of a community solution.”

If the mandatory seat belt law came into Congress today, it would not pass.

In Philadelphia, Andi Snyder, whose two children are 10 and 12, has no hesitancy with getting the COVID-19 vaccine when it becomes available. Though she believes there is a small risk associated with vaccines for some individuals, she trusts that the societal benefits outweigh the risk. “We are all healthy and are not concerned about adverse vaccine effects for us personally.” The family has several loved ones who are immunocompromised, and protecting them from COVID-19 once a vaccine is available is of paramount importance to Snyder. Like Lane and Zehr, she also prefers to research before making decisions. “I like the CDC website for most of my info, and also peer-reviewed journals for stuff like this, like The Lancet.”

The world is likely still months, if not years, away from a COVID-19 vaccine, and Kaufman fears that the doubt placed into the minds of the American people in the meantime will be too hard to overcome. “I don’t think there will be enough vaccination for herd immunity. There will be continued outbreaks.”

She is pessimistic about the ability of today’s population to act in the public interest. “There is now this extreme quest for freedom from everything. I was thinking this morning [that] if the mandatory seat belt law came into Congress today, it would not pass.”

Parents of immunocompromised children, along with others, are waiting for a vaccine. The virus is one that many experts worry will be difficult to inoculate against, and there is no clear frontrunner in the race to a successful vaccine. In parts of the U.S., it is hard to imagine that normal life will be able to resume until we have one. At that point, predicts Kaufman, “the COVID-19 vaccine will become the symbolic emblem for what is wrong with the fragmentation of knowledge.”