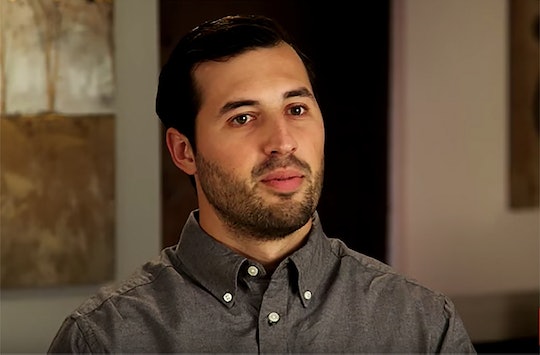 Jeremy Vuolo Is Catching Heat On Instagram For This Frustrating Reason

Jeremy Vuolo just celebrated the 1-month milestone of his newborn daughter, Felicity. And in between adjusting to dad life and work, Vuolo managed to hop onto Instagram on Sunday to share a beautiful photo of his wife, Jinger Duggar. Although many people complimented the gorgeous snap, some fans took to the post's comments section to blast Vuolo for a ridiculous reason. Apparently, a few people are ticked off Jeremy Vuolo replied back to a comment Tori Roloff of Little People, Big World fame left on the pic, while supposedly ignoring his other supporters. Sigh.

Shortly after Felicity made her big debut on July 19, Vuolo shared a hilarious #dadlife quote to social media. “To Sleep, my dear friend and faithful companion,” Vuolo penned on July 23, according to Twitter. “So long. It’s been a good ride. Fondly, Jeremy.”

And just one day later, Vuolo was at it again. “To coffee, It’s just you and me now," Vuolo joked. "Don’t let me down. Gratefully, Jeremy.”

The good news is it looks like Vuolo has settled into his new life as a dad since writing those tweets, as evidenced by a shot he shared of Duggar on Sunday. "Summer Saturdays," Vuolo captioned a stunning pic of Duggar in a light pink top, according to Instagram. Aww. It's nice to see Vuolo and Duggar enjoying some personal time together, a difficult feat when you're parents to a 1-month-old kid.

As it turns out, I'm not the only one who thinks the photo is sweet. Roloff, who has left comments on the couple's respective Instagram accounts before, chimed in: "Uhm so that mama is looking fantastic. Wow! Congrats on your new baby girl!!"

Vuolo agreed with Roloff's sentiment, responding: "@toriroloff Thanks, Tori! She gets prettier every day... and so does Felicity. 😉"

Although one would think this adorable exchange would prompt kind reactions, a lot of people took it negatively. In a nutshell, a few fans think it's rude Vuolo supposedly ignores their comments but makes it a point to respond to other public figures.

"@jeremyvuolo You don't reply to fans that make nice comments all the time but one comment from another reality star and you're there straight away," someone wrote, according to Instagram. "Not good."

"I made a nice comment, but didn’t think anything of it until I saw you reply directly to @toriroloff. I’ve had that thought before," a fan responded to the original comment. "There is very little contact with the thousands of fans that support you too all the time. I am disappointed as well."

"I understand it and agree with everything you said too @mimigrammie," a person agreed. "I wish they would take the time to reply to some of their fans."

... I have always loved Jinger and Jeremy; their love story is beautiful. However, I support those of us who make an observation of Jeremy responding, right out of the gate to Tori Rolof ( who I happen to love) thanking her for her kind words she made. I have been a fan, IG follower, and a supporter, since their courting days. It’s just simple etiquette and politeness to shout to loyal followers once and awhile ...

Others, however, jumped to the new dad's defense.

"He has a busy life. He doesn’t sit in front of the tv 6 hours a day and now he has a new baby," a person penned. "He gets thousands of messages every day, give him a break, and YES he does answer people if you are genuinely interested in the Lord, his mother’s charity work or not simply just a huge fan of the show."

... I comment also, but I never expect them to answer. They have lives outside of social media and even the television show. Did you ever stop and think that he posted the pictures, she commented almost immediately, he saw it and commented back and then got so many more after that he has ignored it. This isn’t something to get upset about. This sounds so much like high school it is sad. Most of us are adults and it is time we start acting like it on social media.

"He has responded to plenty of fans! Look through his other posts," a fan argued.

Of course, Vuolo and Duggar are under no obligation to respond to fan comments. Not only are the two exceptionally busy with a newborn these days, but they have the right to choose who they engage with on social media. It's also important to remember none of this stuff is personal — there's nothing offensive about Vuolo and Duggar loving and appreciating their fans from a distance. That being said, fans should probably relax a bit when it comes to Vuolo and Duggar's Instagram posts going forward. At the end of the day, they're just two people trying to do their best as new parents.