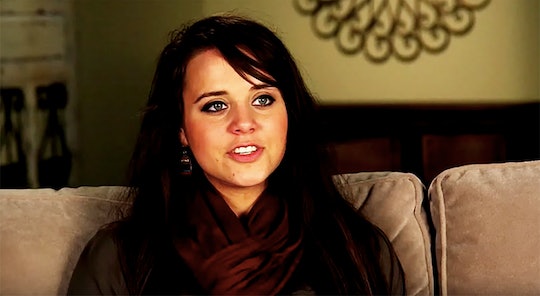 Wait A Sec, Jinger Duggar & Tori Roloff Might Actually Be Friends — Here's Why

Counting On star Jinger Duggar has a lot of supporters in her corner to see through the highs and lows of parenting. From Duggar's sweet husband, Jeremy Vuolo, to her large family full of siblings and in-laws, the new mom has many people to cheer her on as she navigates life with her daughter, Felicity. But just when you thought Duggar's world couldn't get any more loving, Little People, Big World star Tori Roloff left a heartwarming comment on one of Felicity's pictures. The cute remark has some people speculating whether Tori Roloff and Jinger Duggar are friends, while others are convinced the two are pals. So, are these two TLC celebrities actually friends? As it turns out, Roloff and Duggar share a lot of similarities.

After Duggar gave birth to Felicity on July 19, she took to Instagram on Friday to share a precious photo of the baby. "We are so in love with this little doll! 🎀 #felicitynicolevuolo," Duggar captioned a shot of Felicity in a pink outfit and bow-adorned hat.

Well, it looks like Roloff caught wind of the beautiful snap because she left Duggar a glowing comment congratulating her on the birth. "Congratulations, girl. Such a gift from God," Roloff wrote, according to Instagram. "I can tell you're such a good mama! She's perfect."

Duggar later responded: "Thanks, Tori! Yes, we are indeed grateful to God for this precious gift!"

Aww. Roloff and Duggar are adorable. It's heartwarming to see the Counting On and Little People, Big World universes collide in this way.

Following the sweet exchange, fans took to the Duggars Snark Reddit to discuss the possibility of a friendship between Roloff and Duggar.

"I feel like they just know each other because of both having TLC shows," someone theorized on Reddit. "But I don’t even think they’ve actually met. I always wish they would- like how all the Teen Moms do. Edit to add: throw in the Browns from sisterwives too."

Someone else chimed in: "They probably met at some point at a TLC photoshoot or something ... "

"That comment marks the third time I’ve seen Tori tell Jinger she’s 'a good mama,'" one person claimed. "I don’t think Jinger has responded to her until now."

"I’m sure she only replied because she’s a Christian," a commenter argued. "It would shock me if Jinger publicly displayed friendships with non-religious people."

And one fan remarked that Roloff is the type of friend Duggar should have. "Tori swears and drinks wine," the user joked. "She’s the edgy Christian ™️ Jinger needs."

Although it's not clear if Roloff and Duggar have hung out in real life, there's a good chance they're at least buddies on social media. The two have a lot in common, after all, like their TLC connection and devout Christian beliefs. And similarly to Duggar, Roloff often mentions her religious beliefs on Instagram.

Adding more fuel to the friendship theory is the fact that they're both reality stars with young babies (Roloff is the mom to 1-year-old Jackson). Roloff knows all too well what it's like to be mom-shamed in the public eye, and I bet she can help Duggar handle any negative comments thrown her way. In fact, I wouldn't be surprised if Roloff reached out to Duggar following the backlash concerning her recent photo of Felicity in a headband. You never know.

But don't expect these potential BFFs to meet up IRL anytime soon. Duggar is really busy with her newborn these days, and it's not easy to get from her home in Laredo, Texas to Roloff's pad in Helvetia, Oregon. I'm talking connecting flights, people.

Still, it would be awesome if Duggar and Roloff do find time to meet up one day. The two have a lot in common, and I don't doubt they'd hit it off.