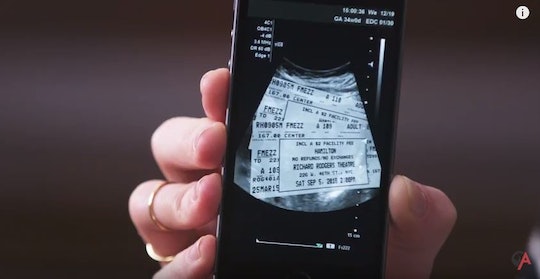 Some Women Want 'Hamilton' Tickets More Than Babies, According To This On-Point Parody

Some of today's hottest comics from Saturday Night Live, The Tonight Show, and others are teaming up to make hilarious online videos under the name "Above Average," and, if you haven't caught one of their bits yet, this is one of the funniest so far. The video asks the important question, which would you rather have, a baby or tickets to Hamilton? It's a thinker. I mean, which really is more of a miracle, a baby or scoring tickets to the Broadway show whose ticket prices are only reasonable if you buy them at least six months in advance? It's a tough call.

The title "Hamilton Tickets Are Better Than A Baby" pretty much says it all. A woman ecstatic about her pregnancy shares the news with her friends only to be upstaged by her friend who just scored tickets to Hamilton. That's when the reaction of the ladies in the room goes from "Aww" to "Aw hell yes!" and the mama to be gets her feelings hurt. The two even share the same "due" date in 30 weeks.

"Hello! You guys it took me five painful rounds of IVF to have this baby," the pregnant girl, on the verge of tears, tells her friends. Then you get the best line of the video from the friend sitting to her left. "Hey, we're happy for you," she says, putting a soothing hand on her shoulder. "It's just that only some people want a baby, and everyone wants Hamilton tickets."

So true and so many LOLs. Check out the whole video.

They've got a point. Visitors to the official site for Hamilton have to sign up for an email just to get a notice for when tickets might be available. The Broadway theater casts ticket availability as "extremely limited." And now that Hamilton just won a Pulitzer Prize on top of its millions of smitten fans, it's unlikely tickets are going to be any easier to get anytime soon.

But besides the obvious joke about everyone's latest Hamilton obsession, there's an important message for women here, too. Now some people are going to see the gag as totally insulting to women experiencing fertility issues. But, as a mother who had to undergo a little IVF and faced circles of friends just like that, it's nice to see a little of the gravity taken out of the whole motherhood conversation. Maybe as women we put way too much stock in procreation? Lots of people have babies. Is that really such a miracle to be celebrated and worshiped to the point where it makes some women feel guilty for not having kids?

The fact that we can make these jokes speaks volumes about the strides women are making toward being whole, actual people instead of just a biological clock ticking down until our usefulness dries up with our ovaries. The fact that a group of women can sit and nod at the statement that "not everyone wants a baby" seems like a major feminist statement to me. That's an option. And maybe birthing babies and giving them very important names isn't the only thing we're allowed to focus on.

All that said, I love motherhood and being a mom. Having a baby was always very important, and, because it was harder for me than most, motherhood always loomed large and felt like the most important thing in the world. But it isn't — and doesn't have to be — for every woman, and that's a great thing for all women.

I'm not totally sure about the husband being forced to sleep in a cage, but I'm just going to overlook that bit. Because one woman's miracle baby is another woman's "Hamilton ticket score." And that's a girl power message worthy of a Lin-Manuel Miranda rap.