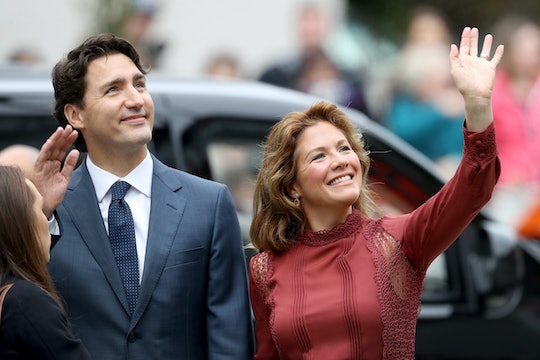 The purpose of International Women's Day, March 8, should be pretty self-explanatory. It's right there in the title. It's a day to celebrate women, women's rights, and all of the strong and brave women from all over the world who fought for women's rights, ever. It's not complicated. But some women still want to make sure that the men don't feel left out. Which is exactly why Sophie Trudeau is being criticized for her Women's Day Facebook post that encourages women to celebrate men. On their day.

On Tuesday, the unofficial "first lady" posted a picture of herself with her husband, Canadian prime minister Justin Trudeau, on Facebook and Instagram and wrote, "Are you ready to ignite change? This week, as we mark International Women’s Day, let’s celebrate the boys and men in our lives who encourage us to be who we truly are, who treat girls & women with respect, and who aren’t afraid to speak up in front of others."

She then included a call to action:

Take a picture holding hands with your male ally & share it on social media using the hashtag #TomorrowInHand. Together, we can create a movement that inspires more men to join the fight to build a better tomorrow with equal rights & opportunities for everyone… because #EqualityMatters.

Oh, why oh why Sophie? Surely this must be a mistake.

Mrs. Trudeau's call to action on Women's Day betrays a sort of internalized misogny from which too many women still suffer. Society has taught women that we shouldn't just sing our own praises and focus on what's good for us, we need to include everyone, every time. Women do this sort of thing all the time — by trying to "have it all" and not complain, not putting themselves up for a raise or promotion, and trying to compromise everything to make sure everyone gets the spotlight, not just themselves. Even their own holiday.

It's this kind of thinking that actually sets women back in a major way. Equality does matter, Mrs. Trudeau definitely got that point right. But women all over the world are not afforded the same rights as men — whether its the disparity between insurance coverage for Viagra versus contraception, the gender wage gap, or that women still do the majority of housework and childcare in their families. International Women's Day is one day out of the year that belongs to recognizing women, their accomplishments, and the work that has to be done.

Yes, women should appreciate male allies. But centering a Women's Day campaign around "thanking" men for all they do, sort of implies that women need men to "be all they can be." They don't. Sending the message to women, and especially young women, that men should be "thanked" for believing that women are equal and deserve basic rights and autonomy of our own bodies is just backwards.

Being a "feminist" shouldn't be a thing that men get a sticker, a hashtag, or extra love for. Women should expect men to believe that they are equal as the default worldview. As Maisie Williams once put it, in a perfect world, we would stop calling people feminists altogether and start referring to them as "normal people."

Instead of "standing by" women and supporting the fight for equal rights, it would be much more helpful for "woke" men to teach other men that women should have a right to choose, that the wage gap exists, or that women's bodies do not exist for them tomorrow (and every time they spot sexism within their own male social groups). Instead of women posting pictures and celebrating the men in their lives, maybe men should celebrate women on International Women's Day, too. Is that too much to ask?

Men have had the past, oh, 6,000 years at the top, by themselves. Do they really have to get International Women's Day, too?