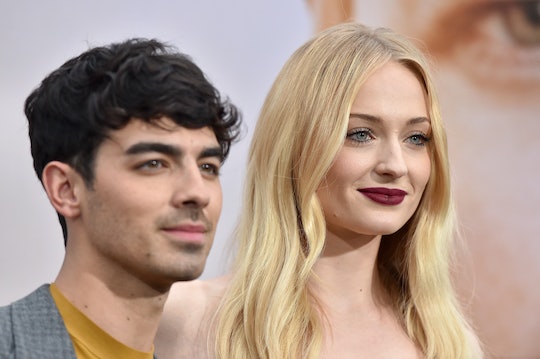 After giving birth to her first child with husband Joe Jonas this summer, Sophie Turner has shared a few photos from her pregnancy. Over the weekend, the new mom posted three photos on Instagram, sharing an intimate look at her pregnancy with her daughter Willa.

Tagging Jonas in all three posts, Turner shared two photos of her in a bikini, one of which also features their dog with her in the pool, and another of her in pink pajamas from the Hotel Bel-Air with Jonas' hand on her bump. The Game of Thrones actress captioned each photo with three simple emojis: the pregnant woman, double hearts, and a sun.

Although a rep for the couple confirmed to Romper that Turner and Jonas were "delighted to announce the birth of their baby" in late July, the new parents pretty much kept quiet throughout Turner's pregnancy. When a source revealed to JustJared in February that they were expecting, they said that the "couple is keeping things very hush hush but their friends and family are super excited for them."

Hush hush, indeed. Before these photos, Turner and Jonas had not posted anything about their little girl on the way.

While it's not clear when exactly she gave birth, Turner and Jonas welcomed their daughter, who they reportedly named Willa, sometime in July, according to TMZ. And as you probably expected, they're "obsessed" with her.

"The couple is already obsessed and can't stop gloating about the new addition," a source told Entertainment Tonight at the time. "The couple is taking time to enjoy this special moment and have only shared the news with family and friends. With the pandemic, Joe and Sophie have been very cautious about who is around them and their little girl."

While paparazzi snapped a few pics of the actress walking around while she was expecting, these special and intimate photos taken during Turner's pregnancy were shared on their own terms. And considering how "obsessed" the new parents are with baby Willa, hopefully a few sweet photos of the family of three will come sometime soon.