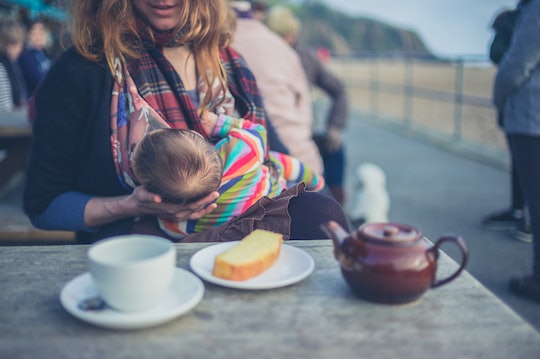 Sorry, But Your Thoughts On Breastfeeding In Public Are Archaic & Sexist

While most people say they are pro-breastfeeding (or at least won’t argue with the fact that mothers should be able to have the choice to breastfeed if they want to), not all of those people actually support breastfeeding. They only support it if they don’t have to see it, or hear about it, or think about it, because it’s gross or immodest or (insert your preferred nonsensical remark here). The truth is, if you don’t support breastfeeding in public, your breastfeeding views are archaic and sexist and deserve to be shut down.

If you think telling a breastfeeding mother to “stay home” or “cover up” is reasonable because non-sexual boob action makes you uncomfortable, you are the problem, not the mother who is simply trying to feed her baby. If you think breastfeeding is lewd or immodest when done in a public setting, perhaps you are the one who needs to cover your eyes or stay home, instead of inconveniencing those who are trying to sustain a tiny human life.

Telling a new mother to stay home to breastfeed is not that different from saying that a woman’s place is barefoot and pregnant in the kitchen, making you a damn sandwich.

Telling women to stay home to breastfeed, or go in a another room, use a bottle, or at least cover up are not reasonable things to ask a new mother trying to establish a breastfeeding routine. Your sexist views don’t have anything to do with “decency” or “modesty,” they have to do with a culture which only values women in relation to the male gaze, and you know what? Breastfeeding is not the time for you to espouse that nonsense.*

Honestly, if you don’t get why telling women to stay home to breastfeed is sexist, that leads me to question whether you understand how breastfeeding works and who is responsible for doing it. Staying home while exclusively breastfeeding would mean staying home ALL. THE. TIME. Babies need to eat frequently, and on erratic schedules, sometimes for many months after they are born. Telling a new mother to stay home to breastfeed is not that different from saying that a woman’s place is barefoot and pregnant in the kitchen, making you a damn sandwich.

Isn’t a nursing cover a reasonable request? No, it’s not. Not by a long shot.

You’re essentially asking a mother to risk starving her baby when out in public, not to mention her own discomfort and potentially lowered milk supply, simply so you don’t feel uncomfortable. I’m sorry, but if you aren’t the one dealing with a screaming hungry baby and painful overflowing milk boobs, you don’t get to make the call of when and where is an “appropriate” place to breastfeed.

Or maybe you simply want women to cover up their milk breasts when they aren’t there just for show. Isn’t a nursing cover a reasonable request? No, it’s not. Not by a long shot.

While some women may want to cover up because they feel uncomfortable breastfeeding in public (because of ingrained patriarchal bullshit, or because they're afraid of having their bare breasts ogled, also known as external patriarchal bullshit), it’s a huge pain. Babies generally don’t like being covered with a blanket while eating and will do some pretty ridiculous acrobatics to get the cover off so they can breath some fresh air instead of being relegated to a dark, hot feeding tent. Not to mention it makes it hard for new moms to see if their baby has a good latch, and it really ruins the whole bonding experience breastfeeding can have between mothers and babies. But hey, it makes you squeamish, so maybe it’s worth it to ruin all that, right?

Their choice should be more important than your archaic, sexist feelings about breastfeeding, because you know what? Breastfeeding isn’t about you.

That’s really the crux of it. Breastfeeding is about a mother and her child, and simply because breastfeeding is happening in your general vicinity doesn’t mean your opinion about it should matter whatsoever. It doesn’t involve you in any way. It isn’t about you at all. Mind your own sweet business and move along. Because breastfeeding is hard enough without having to deal with oversensitive misogynists who have meltdowns over seeing a split second of areola. We’re keeping babies alive. We’ve got more important things to worry about that your fragile feelings and wandering eyes.

*”Never” is the correct time to espouse that nonsense.