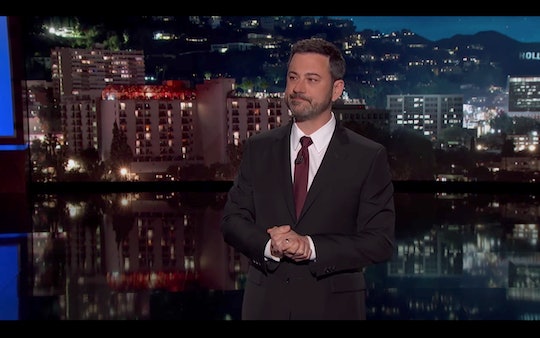 Why Jimmy Kimmel's Monologue Was So Important To Parents

It's not often that Jimmy Kimmel actually tackles difficult subjects on his show Jimmy Kimmel Live, but on Monday night, the late-night host shared a story so heartbreaking it moved him to tears. In the moving segment, Kimmel explained that his newborn son, Billy, had been born with an unexpected heart defect.

His monologue resonated with many viewers, in part because some people interpreted it as a clarion call for universal healthcare. Some conservatives even took Kimmel to task, accusing him of using his son's story as an opportunity to promote a political agenda.

But as a mom who can directly relate to his story, I know there was nothing political about Jimmy Kimmel's monologue about his son's illness. He was simply telling parents who have also struggled with watching their children deal with health issues that they are not alone, as well as delivering a profound message of gratitude to those who saved his son's life.

After spending a week off the air, Kimmel returned to his show Monday, according to The New York Times, and appeared to get emotional almost immediately after beginning his monologue. He explained to the audience that on April 21, his wife, Molly, gave birth to the couple's second child. Although they initially thought the delivery had been relatively easy and that all was well, within a few hours, a nurse noticed that something wasn't quite right with their son. Further testing revealed that Billy actually had a series of undiagnosed cardiac abnormalities known as tetralogy of Fallot (TOF) with pulmonary atresia — a condition which basically means that blood cannot properly flow between the heart and the lungs, according to the Centers for Disease Control. Most babies with TOF require surgery soon after birth to correct the defect, and as a result, Kimmel's son was rushed to the Children's Hospital of Los Angeles for the procedure, which he had at only a few days old.

Kimmel's fear and heartbreak is palpable in the 13-minute clip. While he made a point to note that the story had a happy ending (he eventually confirmed that his son is at home and doing well), the truth is that hearing him recount the details of his son's diagnosis was totally gut-wrenching, because it reminded me an awful lot of my own daughter's birth.

Unlike Kimmel and his wife, when I gave birth to twins in 2012, I was pretty aware even before they arrived that things were not going to be OK. I was placed on strict hospital bedrest when I was 24 weeks pregnant due to threatened pre-term labor, and when my water broke a week later, it was painfully obvious that it was far too early to expect to deliver two healthy, thriving babies.

My children needed a great deal of medical intervention as soon as they arrived. They were placed on ventilators to keep them breathing and alive, and were basically immediately wrapped in plastic wrap to ensure they didn't lose crucial body heat before being eventually being placed in incubators. But I could still relate to Kimmel's shock over his son's diagnosis, because not long after the twins were born, my husband and I learned that further tests showed that our daughter had also suffered a significant brain hemorrhage.

Just as there is absolutely no easy way to hear a doctor tell you that your son has a heart defect, hearing that your tiny newborn has had a serious brain bleed is completely devastating. As Kimmel so aptly noted, coming to the realization that, actually, this news is really bad, and actually, things really might not be OK, is completely terrifying. We, too, had to wait for answers, hoping against hope that maybe we'd get some relatively good news (while Kimmel said he was hoping to hear that the problem was with his son's lungs — and therefore less serious — we were hoping that our daughter would end up being one of the lucky babies whose brain hemorrhages self-resolve without further complication). Yet, in both instances, our babies lost the coin toss: Billy had tetralogy of Fallot, while our Madeleine had developed severe hydrocephalus as a result of a clot that had formed in her ventricles. Both of our children would ultimately need surgery.

What far outweighs any lingering sadness over the potential long-term consequences of our children's rough start in life, is the incredible and overwhelming gratitude we feel to the doctors, nurses and other medical professionals that managed to keep our babies alive.

Luckily, just like Kimmel's little boy, our daughter's surgeries were successful, and thankfully, she and her brother both eventually came home. (Because they were extremely premature, we did still have to wait another few months before we could actually leave the neonatal intensive care unit.) Now, our twins are happy, healthy, energetic 4-year-olds.

A year ago, Madeleine was diagnosed with mild cerebral palsy as a result of her prematurity and associated brain injury, but other than the fact that she often wears a brace on her right leg for mobility, and that she struggles a bit more than most kids with physical stamina, she is, miraculously, pretty much a totally typical-developing child.

As he mentions in his monologue, Kimmel's son will likely also go on to be a thriving, healthy child — though he too will need lifelong monitoring by doctors and surgeons because of what he went through. And yet, even only a week out from what was likely the most horrifying experience of his entire life, Kimmel managed to perfectly capture a reality that parents of once-sick babies know to be true: what far outweighs any lingering sadness over the potential long-term consequences of our children's rough start in life is the incredible and overwhelming gratitude we feel to the doctors, nurses and other medical professionals that managed to keep our babies alive.

Having a sick child is heartbreaking in such an all-encompassing way that it's the kind of thing you wish no one ever had to experience.

As a result, Kimmel chose to specifically read out a list of people he wanted to thank, on air, by name, individually. It makes sense that he would want those incredible men and women to know how much they meant to him — particularly his son's cardiac surgeon, who, just like my daughter's incredible neurosurgeon, managed to perform what Kimmel described as "magic" on their tiny, sick bodies.

But he didn't stop at just expressing his gratitude. Towards the end of his monologue, he took the opportunity to use his son's experience as a reminder of the very real and devastating reality that many parents face, not just by having to watch their children struggle with life-threatening illnesses, but also by potentially having to struggle to cover the associated medical costs.

Kimmel and his wife, of course, likely didn't have to think about whether or not they could afford their son's life-saving heart surgery or his accompanying hospitalization. But not every family is so lucky. That's why Kimmel used his monologue as an opportunity to make an impassioned argument in favor of universal healthcare:

You know, before 2014, if you were born with congenital heart disease like my son was, there was a good chance you'd never be able to get health insurance because you had a pre-existing condition. You were born with a pre-existing condition, and if your parents didn't have medical insurance you might not live long enough to even get denied because [of it].

Kimmel became emotional once again as he argued that access to healthcare really shouldn't be viewed as a partisan political issue. "If your baby is going to die and it doesn't have to, it shouldn't matter how much money you make," he said.

While that message resonated deeply with so many Americans, not everyone agreed. On Tuesday afternoon, former Illinois Rep. Joe Walsh tweeted about Kimmel's son, writing: "Sorry Jimmy Kimmel: your sad story doesn't obligate me or anybody else to pay for somebody else's health care." Twitter users promptly took Walsh to task for the comment, but he wasn't the only one who believed that Kimmel's plea unnecessarily politicized his son's struggle:

Unfortunately, it's not entirely surprising that Kimmel's political commentary rubbed some people the wrong way. What is surprising, however, is that anyone could listen to Kimmel's sincere, tearful monologue and still question whether or not babies like Billy should be entitled to receiving the best possible medical care available, regardless of whether or not their parents can afford it.

It seems likely that those criticizing Kimmel have never had to know how it feels to be ready to sacrifice anything and everything you possibly can to ensure the health and safety of your child. If chopping off my own arm would have somehow saved Madeleine from a brain hemorrhage and two surgeries, there's no question I would have volunteered to do it in a heartbeat.

Having a sick child is heartbreaking in such an all-encompassing way that it's the kind of thing you wish no one ever had to experience. But while Kimmel and his wife certainly didn't deserve the excruciating week they just endured, the fact that he was able to speak about it so openly and eloquently on his show was actually a pretty profound gift to all of the other parents out there who have been in a similar situation.

It may not have been Kimmel's intention to give a voice to the countless parents who have had to sit and cry by their infants' hospital beds, and he may not even realize that that's what he did. But giving birth to a child that ends up facing serious medical complications can feel extremely isolating. As a mom who still at times struggles with lingering sadness and guilt over my children's entrance into the world, I can honestly say that Kimmel's emotional monologue felt so incredibly validating. And there's nothing remotely political about that.

More Like This
There's A Good Reason Why Your Baby Is So In Love With CoComelon
10 Ways Breastfeeding Is Good For Moms, Too
Gathre’s Winnie The Pooh Collection Is Finally Here
Does Pumped Breast Milk Have Antibodies? Experts Weigh In