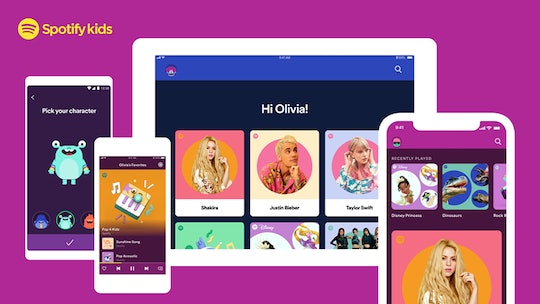 The task of keeping kids occupied is an ongoing struggle, but thankfully Spotify has released a new app just for kids to aid in just that. And it's available for download on iOS and Android devices starting today.

On March 31, after launching in other countries around the world, Spotify has introduced Spotify Kids in the United States as well. The app, which is still currently in beta phase, designed with "safety and privacy" for kids ages 3 and older lets little ones explore soundtracks, stories, and singalongs. What's more, the content is ad-free and handpicked by Spotify editors to ensure it's appropriate for kids.

"Parents can reclaim their own Spotify libraries and all the personalization that they love, while their kids can develop a love for music and stories through an experience that’s designed just for them," Alex Norstrom, Spotify's chief premium business officer, said in a statement.

Here's a closer look at what Spotify Kids has to offer:

Spotify Kids has also added a global playlist titled "Wash Your Hands," which features the newly released song from Pinkfong called "Wash Your Hands with Baby Shark." There is also a "Learning" playlist hub offering songs that teach kids about counting, ABCs, science, and more.

As privacy is a main concern for many parents, Spotify is "working on giving parents more control over what kids can (and can’t) listen to and new features that will allow parents to further customize the experience." In the meantime, as Engadget reported, parental controls include "allowing access and locking down settings with a PIN."

"We know parenting is a subjective matter, which is why we took a conservative approach to content for the beta launch," Spotify said. "We are working to roll out features that will give parents more control over their child’s Kids experience."

It's worth noting that Spotify Kids is only available to those who have Spotify Premium Family, a subscription that comes with six premium accounts, meaning no ads, for $14.99 a month. New subscribers are eligible for one month free, so considering all of the benefits music offers children, adding some time to your daily routine just to jam out certainly couldn't hurt.