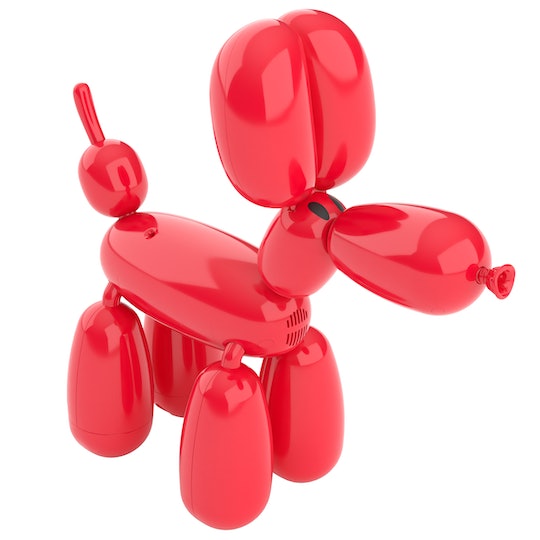 He looks like a Jeffrey Koons pop sculpture, barks like a real pup, and could easily be mistaken for a balloon animal. What is this wild creation? It's Squeakee, the robotic dog you didn't know you needed. Rolled out at the 2020 Toy Fair in New York City, Squeakee is poised to take toy stores by storm when he's released this October.

So what exactly does this curious dog do? The better question is, what doesn't he do. Squeakee, the work of Moose Toys (the makers who brought your kids Goo Jit Su squishy super heroes and Scruff-a-Luvs), is a personality-packed-pup that behaves just like a real dog.

"He responds to his little inflator pump to 'eat,' can deflate from a toy pin, 'pees' on the floor (a yellow light shows under him when he goes), he farts, and he rolls around and gets belly scratches and can be pet," Romper's on the ground reporter at the Toy Fair tells us.

Did you catch that part? Squeakee deflates! With a pin! Then re-inflates. We have no idea what kind of voodoo magic Moose Toys has employed to make this happen, but we are here for it. Plus, Squeakee provides all that canine cuteness without costly vet bills and chow expenses. What's not to love?

Squeakee has 50 sounds, interactions, and multiple touch sensors, according to a press release, giving him a lifelike appeal. Romper is also told that kids can channel famous dog trainer Cesar Millan and train Squeakee to play and do tricks with his ball. He'll even listen and respond to their voice. Moose Toys says the electronic dog "captures the magical and humorous moments of balloon animals in your favorite new toy." Just check him out in action:

Thankfully, however, no interaction with clowns need be a part of purchasing this robot/balloon animal novelty. Just visit your local toy store this fall.

More Like This
18 Fun Mother & Son Halloween Costume Ideas
Where To Buy School Uniforms, From Jumpers To Dress Socks
18 Cute Notebooks That Make Every Subject Exciting
These 21 Educational Board Games Are Perfect For Homeschoolers