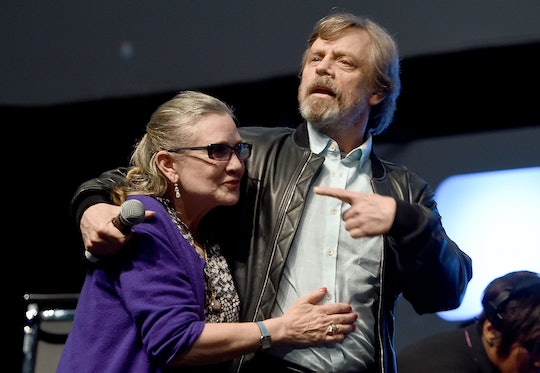 'Star Wars' Quotes Honoring The One & Only Leia

The world was stunned and saddened by the untimely death of actress, author, producer, and mental health advocate Carrie Fisher. After sustaining a significant heart attack during a flight from London to Los Angeles on Dec 21, Fisher passed away at 8:55 on Tuesday morning, just four days later. Now fans across the globe are sharing Star Wars quotes to pay tribute to Carrie Fisher, because we need The Force now more than ever.

While Fisher is best known for her portrayal of Princess Leia in the world-known Star Wars franchise, Fisher was also an unapologetic mental health advocate; always open, honest, steadfast, candid, and fierce about her bipolar disorder and the unnecessary stigma surrounding mental health. Perhaps that's why her timeless quotes in numerous Star Wars films were so important, poignant, and meaningful to her fans; they were more than just witty banter or lines in a script. No, her quotes as the Princess and one of a few savors of the universe were indicitive of a greater fight; a fight an estimated 1 in 5 Americans will suffer through in a single year, thanks to the detrimental and dangerous mental health stigmas our society seems hellbent on holding onto. In times of turmoil, struggle, uncertainty, or just exhaustion, we could all collectively turn to Princess Leia, and know that The Force was with us.

So, it's no surprise that fans across the globe are taking to Twitter to share their favorite Princess Leia and Star Wars quotes, in a show of sadness, appreciation, and solidarity.

Of course, there are too many quotes to count, as Fisher's work in Star Wars was as timeless as it was memorable. If you are in need a few more to guide you through this particularly heartbreaking and difficult time, here are some of my personal, fan favorites:

Fear is the path to the dark side. Fear leads to anger. Anger leads to hate. Hate leads to suffering.

In a dark place we find ourselves, and a little more knowledge lights our way.

Strike me down and I will become more powerful than you could possibly imagine.

Compassion, which I would define as unconditional love, is essential to a Jedi's life. So you might say that we are encouraged to love.

While Fisher gave us so much on her 60 years on this Earth, it really didn't seem like enough. While I cannot speak for everyone, as an avid fan of the Star Wars franchise, Fisher's books, her mental health advocacy, and her relentless humor, I would have wanted (read: needed) more of her. More of her determination. More of her perseverance. More of her unapologetic authenticity. More. Then again, in so many ways, Carrie Fisher gave us everything we already needed, just like Anakin and Luke Skywalker:

Thank you, Carrie Fisher. Thank you for already saving us. We just didn't know it yet.