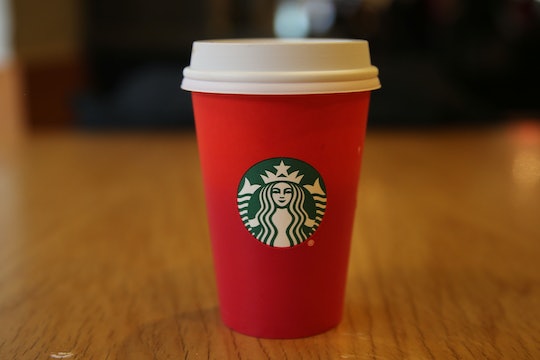 Starbucks Has A New Holiday Drink At Select Locations, & People *Love* It

The big wigs at Starbucks really know how to stir up some feelings in people when they're brewing up delicious coffee drinks. I'm not sure what it is about the coffee giant that gets people so keyed up... maybe it's the caffeine. But for whatever reason, when Starbucks has a new holiday drink, people always have a lot of opinions about the flavor. And the cup. And the price of the drink. And just about anything else you can imagine.

Now that the holiday season has finally arrived, it seems that Pumpkin Spice Latte season has officially drawn to a close. While it's sad to see the end of something you love so desperately, fear not everyone; there's a new latte in town. Well, almost in town and only in certain towns that have Starbucks Reserve coffee bars. Starbucks announced that it will be launching the new Juniper Latte at the beginning of December, and already I have some feelings about the name. I'm worried I'm not quite ready for such a beautiful, lyrical beverage. And the ingredient list isn't helping any.

According to Starbucks News, the base of the drink is Starbucks Christmas Blend, a dark coffee with orange and spice notes. To create the Juniper Latte, the company then adds steamed milk infused with dried juniper berries, sage, and mandarin. It is then topped off by a sprig of fresh sage, which has me imagining that I'm a character in Dickens' A Christmas Carol. Coming in from the cold wearing my half gloves and my huge scarf and long coat to enjoy a Juniper Latte by the fire.

Lillian Ontiveros of Starbucks Research and Development explained the inspiration behind the interesting new latte, which seems a bit more sophisticated than the usual yummy, sweet holiday lattes like Eggnog Latte or Creme Brulee Latte. According to a statement:

Coffee is our muse. We started with our Christmas Reserve. That earthy aged Sumatra inspired the woodiness, while the citrus flavor in the Hacienda Alsacia ties in that note of sweet orange. With the first sip, you’ll inhale that woodsy aroma and the savory woodiness of the juniper. On your second sip, you'll get the mandarin. The sage follows on the backend. It's a well-rounded experience.

Of course, some people had thoughts when they first learned of the Juniper Latte from Starbucks.

One Twitter user noted that the juniper berry has some *other* uses as well.

Seth Meyers, host of Late Night with Seth Meyers, got oddly political about the new latte.

Some fans just colored themselves impressed.

I mean, I can see the appeal of the Juniper Latte. Orange and spice and espresso and juniper berries... it sounds like a drink from the olden days that people served to carolers when they welcomed them in from the cold. Like the sort of drink that warms you from the inside out.

Sadly, not everyone will get the chance to enjoy the new Juniper Latte or the equally amazing Juniper Affogato, made with a scoop of actual juniper ice cream. The lattes are only available for a limited time at the Starbucks Reserve Roastery in Seattle, and participating Starbucks Reserve coffee bar locations in New York, Los Angeles, Chicago, Washington D.C., Dallas, and San Francisco, as of Dec. 5, according to Food And Wine.

If you happen to be near one of the Starbucks Reserve coffee bars, get ready to enjoy a Juniper Latte, which sounds like the espresso version of drinking mulled wine. Old-time-y, tasty, and just the right sort of warmth to keep you going through the holiday season.