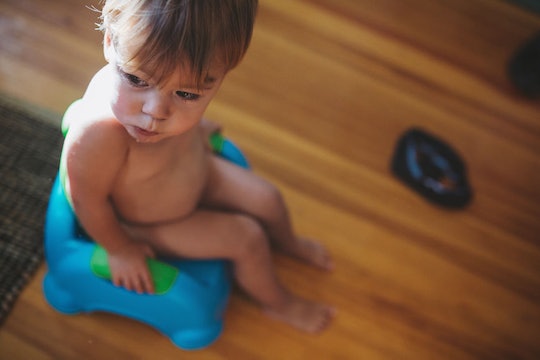 When a child reaches age two or so, most parents start preparing for (and looking forward to) that happy day when they can stop buying diapers and kick the changing table to the curb. In many cases, the transition happens during early toddlerhood and finishes by preschool or shortly after. But when potty training starts late, it can be a frustrating time for parents as well as children.

I speak from experience. I tried to train my kids at the point when they were old enough to sit on a potty and recognize when they were wet. But although they tried a few times, neither of them was especially motivated to graduate to underwear. I'd listen to my friends' success stories and watch their children march nonchalantly into the bathroom, and I wondered: What am I doing wrong?

Nothing, as it turns out. Just as with rolling over, walking, talking, and other early milestones, there's a broad range of "normal" when it comes to potty training. Some children become curious about the toilet as early as 18 months. Others take longer to train for a variety of reasons, explained Care.com: fear of the toilet or the flushing sound; a physical issue such as a small bladder capacity; stress over a life event, such as a move or a new sibling. And sometimes, a child is just too busy or distracted to recognize when it's time to go.

"Some children just aren't ready to toilet train until age 3, or even later," pediatrician Tanya Altmann, MD, tells Romper. Altmann, author of Baby and Toddler Basics and a spokesperson for the American Academy of Pediatrics, adds, "Diapers nowadays are so absorbent and families are often so busy, that it's often something that gets pushed aside until parents have time and the child shows signs of readiness."

Dr. Altmann speaks from experience: "As a working mom, I was busy and didn't really have time to stay home for a week and focus on potty training," she says. "My boys didn't show an interest, so we didn't start until age 3. It took a week, and then we were done!"

For some families, it's just that easy; for others, delaying toileting can have unpleasant consequences. Training late is associated with a higher incidence of constipation and withholding poop, according to one study published in the Journal of Pediatrics. This can result in a vicious cycle: child refuses to poop; child becomes constipated; pooping becomes painful; child becomes terrified and even more resistant.

On the brighter side, starting late does have its advantages. By age 3 and above, most children are well aware of their body's signals that it's time to go, even if they don't always act on them. They're physically able to pull their pants up and down, to sit on a toilet or potty seat, and to wipe reasonably well (they may need a little assistance for the messier times). Plus, they're old enough to understand that it's time to make the transition, and even feel a little peer pressure when they hear that their friends are already trained.

If you're a fellow member of the Late Trainer Sisterhood, here's what Dr. Altmann and other experts recommend to get your child up to speed:

More Like This
Viral Hives In Children: What Doctors Want You To Know
35 Children’s Books Starring Black Characters
Tips to Beat Jet Lag, For You & Your Kids
A Parent’s Guide To Stomach Pain In Kids
What Parents Are Talking About — Delivered Straight To Your Inbox