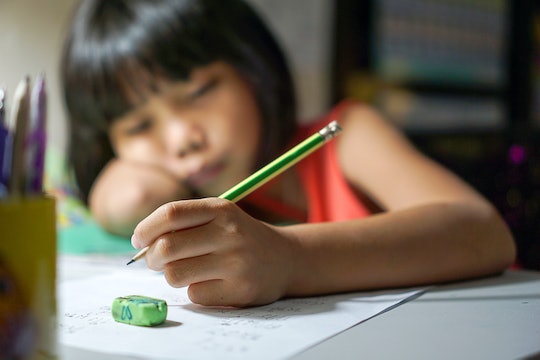 Starting School Later By This Much Time May Help Put Your Kid In A Better Mood, New Study Finds

The start of the school day can sometimes be a serious struggle for everyone involved — not just kids, but for their parents too. Getting a kid out of bed oftentimes feels like an impossible mission. Throw in having to get them dressed, eat a complete meal, and get out of the door by a certain time and you've got a recipe for complete chaos. But the solution to this problem might be as simple as rearranging some scheduling. According to a new study's findings, starting school later may help put your kid in a better mood, and therefore improving the lives of everyone in the "getting to school" process.

It really should be a no-brainer. School is a little demanding for kids and teens — not only does it ask for them to be attentive in the classroom all day, but if they participate in extracurricular activities or sports, their days are even longer and demanding. Of course, the common solution to this problem would be to push the start time of school — at least, that's what one study found, according to ABC News.

The study, published by the Sleep Research Society, observed teen girls from 7th to 10th grade and found that a later start to the school day led to more sleep and a better mood in those who participated.

When researchers pushed the start of school time from 7:30 a.m. to 8:15 a.m., students reported that they had more time to get a full night's rest (and felt fulfilled by it), in addition to their mood significantly improving. The participants also reported that they had less depression, less sleepiness, and felt more refreshed during the day which lasted for nine months, according to ABC News.

It really should be common sense by now — the longer kids sleep, the most rest they have and the better they'll feel about themselves and their environment around them. This study certainly isn't the first to confirm that. A 2014 study published in the Journal of Developmental & Behavioral Pediatrics found that when one school pushed their school start time from 8 a.m. to 8:25 a.m., a majority of students got at least eight hours of sleep and got 29 more minutes of sleep than before the change, according to HuffPost. A 2010 study conducted in Rhode Island found that pushing the start of school back by half an hour, students saw both a mental and physical change in their lives, according to Live Science — they felt less fatigued and depressed and got more sleep on average.

When children get more sleep, they really reap the benefits from it, according to the American Psychological Association. Increased sleep in kids is associated with an increase in attendance rates, an increase in student GPA, and an increase student attention — and who wouldn't want that for their child?

But the debate about pushing the start of school past 8 a.m. still stands and is hotly contested on both sides. A 2015 Centers for Disease Control and Prevention report found that in the United States, the average start time for schools was 8:03 a.m., yet there isn't a huge push for school times to change. This is because changing school start times would be changing "the status quo," according to The Atlantic. If so many schools start at 7:30 a.m. and have been doing that for decades, it's hard to convince them to change now. And to put it simply, according to The Atlantic, people seem to be afraid of change.

Although your child's school might never come around to a later start time, don't be too upset when your kid wants to sleep in on the weekends. This extra sleep could definitely contribute to their happiness and overall well being — and who wouldn't want that?