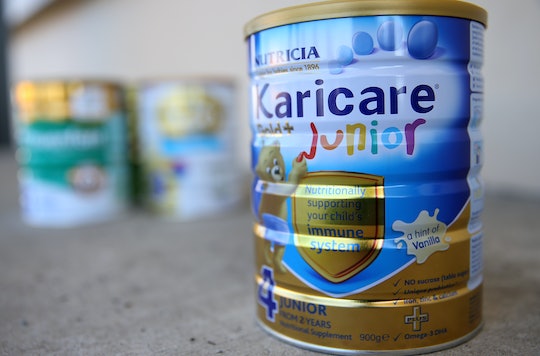 The decision of whether to breastfeed or formula feed a baby is a highly personal one for new moms. It's also a debate that too often rages on a national stage, with strangers sometimes sneering at moms who nurse in public as well as those who opt to nourish them from the bottle. With health care professionals preaching the "breast is best" mantra because of the health benefits the practice offers both mothers and their babies, it's not altogether surprising that breastfeeding rates are up across the country. But statistics on formula feeding now versus 20 years ago show that making breastfeeding universal may not be the most realistic of goals — and that formula offers benefits that some families need.

The American Academy of Pediatrics (AAP) recommends that babies receive their mothers' breast milk exclusively until they are six months old. After that, the academy believes it is best that babies' diets include both solid foods and breast milk to make sure they get the nutrition they need. Breast milk can help to protect babies against colds, pneumonia, and viruses as well as chronic conditions like Crohn's disease and type 1 diabetes and reduce the risk if SIDS, among other advantages, according to Fit Pregnancy. Breastfeeding also promotes stronger bones in women and reduces the risk of obesity in both moms and their babies.

Still, breastfeeding doesn't always prove the easiest or most viable option for some families — although rates have increased within the past two decades. According to one study, only 21.6 percent of American moms were still breastfeeding at six months in 1995, and formula had already been introduced to many of those babies' diets as a supplement. By contrast, the Centers for Disease Control reported that, in 2013 (the most recent year for which information is available), 51.8 percent of moms were doing the same. But the number of exclusive breastfeeders at that point in the baby's life plunged to just 22.3.

And that's because, at the end of the day, breastfeeding is hard — however "natural" it may seem. Some moms experience physical challenges getting their newborns to latch; others can't take the time off work to establish a breastfeeding relationship or don't have the time or space at work to pump.

Regardless, there's no shortage of criticism in store for moms who, whether by necessity or as their first choice, go the formula route. They're sometimes pegged as quitters, failures, or uninformed — just as some are intent to convince breastfeeding moms that their babies must be hungry — it can feel like a lose-lose situation.

But formula can be a saving grace for those who need it. In an illuminating essay for Parenting, Suzanne Barston described how a seemingly never-ending slew of issues — including "soul-crushing postpartum depression," a nerve problem in her left breast, and problems in her marriage — thwarted her plans to breastfeed her son.

It was an emotional, confusing time for her, but when she had her second child, her daughter, she was thankful for the formula once the devastating problems persisted:

I breastfed my daughter for three blissful days. I nursed her until the nerve pain started; until the first fuzzy shadows of postpartum depression began creeping into my peripheral vision; until the pump started talking to me, whispering yousuckyousuckyousuck, just like last time. But this time, I knew I didn’t suck. I knew she’d thrive on formula like my son had. This time, the decision would be mine, and not made for me by fate, or the formula company, or the breastfeeding police.

Another benefit of formula feeding? According to Live Science, it makes it possible for a woman's partner to feed the baby at night. That way, she won't always have to be the one getting up — and, as a result, can be more present, awake, and alert for all the baby's milestones, exciting moments, and challenges.