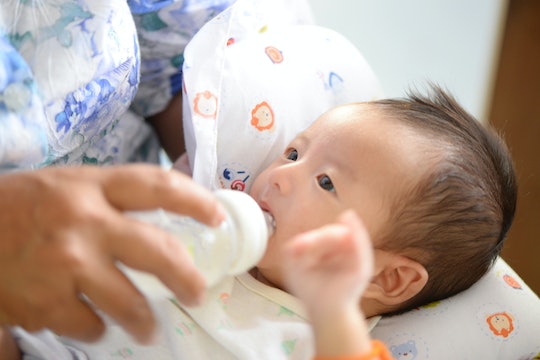 What Moms Who Use Formula Need To Hear

If you spend time with other moms (either in person or online) you're bound to hear a few things about moms who formula feed. Sadly, most if not all of what you'll hear will be overwhelmingly negative, condescending, untrue, and unfair. We live in a culture of perceived "perfect motherhood," where people say the meanest things under the guise of wanting to help "educate" other moms while simultaneously making themselves feel better about their choices. It's time to stop. It's time to realize there are so many things we ought to start saying about women who formula feed.

To be honest, I said a ridiculous amount of horrible things about formula feeding moms before I had kids. I was a lactivist who not only wanted to experience breastfeeding, but wanted everyone else to experience breastfeeding, too. Unless a mother met a set of specific criteria (mainly, having a "legitimate" medical condition or their baby having an allergy), I was convinced she was a "bad mom" if she didn't breastfeed for an extended period of time. In other words, I was a b*tch.

The, I became a mom and didn't make enough breastmilk, due to a medical condition called insufficient glandular tissue. It seemed like everyone — including family members, friends, lactation consultants and strangers on the internet or in the formula aisle at the store — were hellbent on relentlessly questioning my formula feeding. I heard their whispers and read their comments and was negatively affected by it all.

"Do you think she's lying about her issues?"

"She wouldn't have a low supply if she had tried harder."

"Doesn't she know that breast is best?"

"Let me tell you some statistics about health outcomes." (Seriously?)

I couldn't believe how horrible people were. How horrible I had been. It's sad that it took being on the receiving end of comments like the aforementioned, to learn how to be an empathic person and to realize that all of those things I had said moms who either chose or were forced to feed their babies formula, were so untrue and so unfair. So, with that in mind, here are more than a few things we need to start saying about formula feeding moms. If we aim to be honest, fair, and maybe even help change the way our culture views moms, we need to stop with the condescending questions and comments. Because #feminism and #fedisbest and being a decent human being should be the norm.