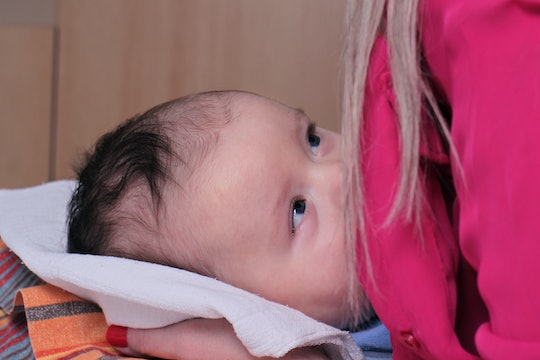 The ways in which motherhood has changed me, or at least altered my perception, are endless. Most of those changes were to be expected, and I'm not surprised that I can't, say, watch certain movies anymore or sit through certain commercials without balling my eyes out. Other chances, however, have been pretty surprising, and it takes me a while to realize that I'm thinking differently because I'm a mom. How I talk about breastfeeding is one of those surprising changes, and I've realized there are so many reasons why you should never say a woman was "successful" at breastfeeding; reasons I didn't truly understand until I experienced breastfeeding for myself, and watched so many amazing women experience breastfeeding for themselves, too.

I had a relatively easy time breastfeeding, certain things considered. My son latched with ease and my milk supply was never an issue, so from a purely physical standpoint, I could breastfeed without really trying. I did, however, experience some mental roadblocks that made the act of breastfeeding really difficult. As a sexual assault survivor, I didn't realize that breastfeeding would act as a Post Traumatic Stress Disorder (PTSD) trigger, so while breastfeeding was physically "easy," it was mentally and emotionally difficult. I then paid attention to the breastfeeding women around me, and realized that while they didn't have any mental blocks keeping them from breastfeeding, they physically weren't able to produce enough milk. I watched some women try everything under the sun to either increase their milk production, to no avail. I witnessed other women battle infections and painful, clogged milk ducts, and more women who had their babies too early and, as a result, couldn't breastfeed their baby because he or she was in the NICU. So many women who had made the choice to breastfeed, but were either physically or mentally unable to do so.

More Like This
Why Does My Baby Cough While Breastfeeding? Experts Explain
12 Helpful Tips For Hiking With Kids
15 Adorable CoComelon-Themed Costumes You Can Buy Or DIY
Gathre’s Winnie The Pooh Collection Is Finally Here