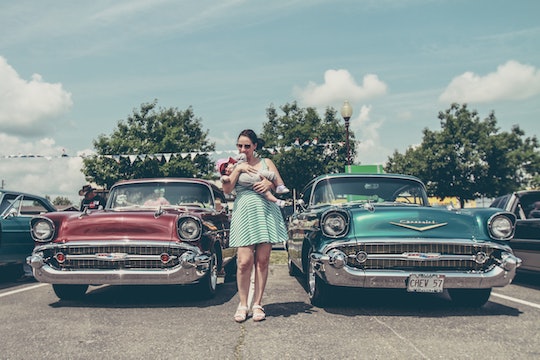 In the immortal words of Run-DMC, it’s tricky. Granted, I don’t think they were talking about breastfeeding, but the fact remains that breastfeeding can, in fact, be very complicated. While all it takes is just a couple of postpartum breasts and a baby (or two or more), many breastfeeding moms know it's not that simple. If you add an extra complication in the mix, like a blocked duct, or forgetting your phone (heaven forbid) or breastfeeding in public, lots can go wrong, I’m afraid.

Thankfully, becoming a mom also means you become slightly more of an all-around badass, so of course most women (if they choose to and feel comfortable doing so) are able to handle public breastfeeding issues like absolute bosses. The ease with which many women breastfeed in public, however, doesn't keep us (or shouldn't keep us) from acknowledging how difficult it can be and usually is. Just because a woman is willing to put herself in a situation where she may be judged, shamed and discriminated against, doesn't mean we should act like those things don't exist or that breastfeeding women are faced with those situations on a daily basis.

Acknowledging how difficult it can be to breastfeed in public shouldn't deter women from doing so (if they choose to and are able to), but rather highlight all the ways we need to #NormalizeBreastfeeding. So, with that in mind, here are a few things that can go wrong when you're breastfeeding in public, because it shouldn't be this difficult.