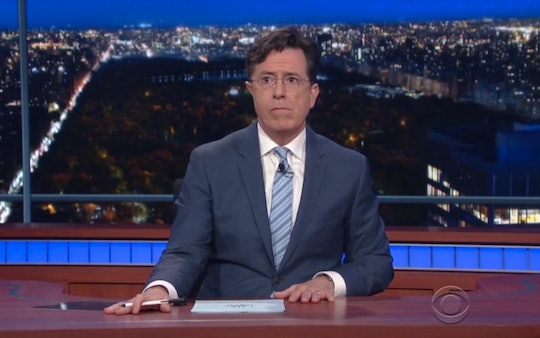 Back in 2011, once TV shows returned to the airwaves, David Letterman and Dan Rather broke down about 9/11 in front of The Late Show With David Letterman's audience. It was a stunning and relatable display of emotion, and one that immediately comes to mind after Stephen Colbert discussed the Paris attack on his version of The Late Show Friday night.

Of course, The Late Show isn't actually recorded late, so when Colbert found out about the attacks midway through his show's taping, the details surrounding the tragedy were still scarce. (And the details continue to be scarce, if we're being honest — though ISIS has claimed responsibility and authorities confirm over 120 dead, there's still plenty of questions that need answering.) Said the host during the taping, appearing to hold back tears:

Folks, we end tonight’s show with a heavy heart because we taped all of tonight’s show, and then we found out about the horrific attacks in Paris today. I know not much is known right now. We do know there have been many deaths and the crisis is still ongoing.

Watch video of the moment on The Daily Beast here.

Though Colbert's show went on — at least in its final moments — many entertainers are canceling their plans because in the wake of the attacks, which led to the deaths of over 120 people. U2 was set to perform in Paris in two concerts, one on Saturday and one on Sunday, for an HBO special, but announced Friday night that they had canceled the shows. The Foo Fighters also decided to cancel the rest of their tour following the attacks. Said the band in a statement:

In light of this senseless violence, the closing of borders, and international mourning, we can’t continue right now. There is no other way to say it. This is crazy and it sucks. Our thoughts and prayers are with everyone who was hurt or who lost a loved one.

While the world is in mourning surrounding the events, here's how to help the victims in the Paris attacks.