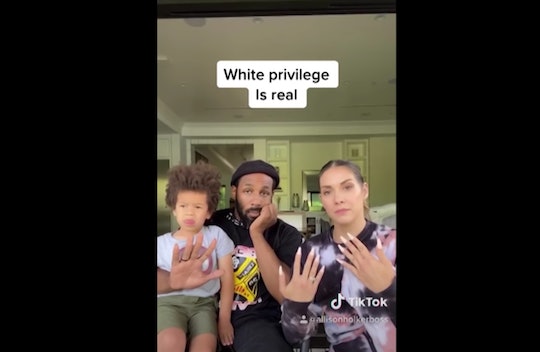 A week after sharing an eye-opening and important video with his wife that shed light on the realities of white privilege and systemic racism, Stephen "tWitch" Boss said the "Check Your Privilege" TikTok challenge and ongoing protests have allowed him to have deeper conversations about race with the people who are closest to him.

During a recent episode of The Ellen Show, the former So You Think You Can Dance and current DJ for The Ellen Show said that the "Check Your Privilege" challenge helped him have "deeper" conversations with his wife, Allison Holker, that they had not had before in their nearly seven years of marriage. "The conversations that Allison and I have had now — deeper conversations of race," he told the show's host Ellen DeGeneres. "And being able to talk to my in-laws about it now on a much deeper level. These conversations are incredibly valuable and they are footsteps for it. They don't solve everything but they are strides forward."

For the "Check Your Privilege" challenge, Boss and Holker started by holding up all 10 fingers and then would put one down for every time they've experienced a situation, like if they've been called a racial slur, have been stopped or detained by the police for no reason, and have been bullied for their race. Boss puts a finger down for every situation, while Holker only puts one down for having to teach her child "how not to get killed by police." The video has since amassed more than 6 million views on Instagram and TikTok.

"I would have put a finger down on all of those," Boss told DeGeneres. "It was just because the first 10 applied, but then the next two did as well."

The couple's video went viral as millions of people around the country have taken to the streets to protest the police-involved killing of George Floyd, demanding justice and denouncing a long history of systemic racism that Black Americans live with daily.

During an appearance on The Ellen Show last week, Boss said it's important for people to put in the work to be better allies to the Black community, imploring their audience to read books and watch movies about racism. "That's not to say that the work is not going to be uncomfortable," he told DeGeneres. "I think that needs to be said and that is not an understatement. It's not going to be comfortable work, but it's something that is incredibly necessary, just for us to move forward, just as a human race through love... You don't have to be a racist to benefit from the system of racism."