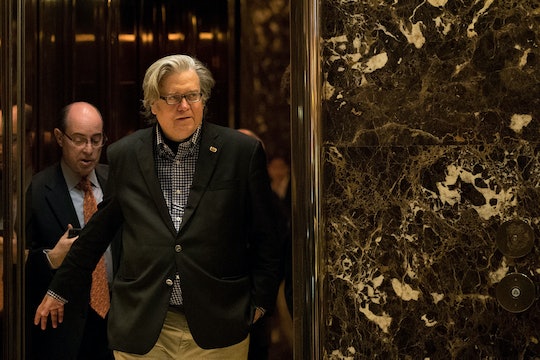 The announcement that former Trump campaign CEO and Breitbart News head Steve Bannon had been appointed as President-elect Donald Trump's chief White House adviser led to widespread backlash, with many claiming that Bannon is a racist, a white nationalist, and an anti-Semite unfit for the position. But if that wasn't bad enough, The Hill has reported that, in an leaked email conversation from December 2015, Steve Bannon said the cure for mental illness is to "spank your children more," which is definitely something I wish I were making up. Bannon reportedly made the remark after Breitbart’s Washington editor, Matt Boyle, suggested that a the news outlet could "open a bridge" to the then newly-elected House Speaker by promoting Ryan’s plan to reform the mental health system. But Bannon, clearly neither a fan of Ryan nor mental health advocacy, responded by writing, “I’ve got a cure for mental health issue[s]. Spank your children more.” (Romper's request for comment was not immediately returned.)

In the email exchange, Bannon went on to say that his "long game" for Ryan was to have "him gone by spring," suggesting that Brietbart's long-standing anti-Ryan coverage has been part of a larger attempt by Bannon to oust the Speaker and what Bannon considered to be his "elite globalist" agenda, according to The Hill. Given Bannon's influential role in the Trump campaign then, it is perhaps no surprise that Ryan has also been a common target of the president-elect's tweets, where he's been described as "disloyal," "weak," and "ineffective."

Ryan has refused to speak negatively of Bannon in the wake of the election though, telling reporters Tuesday that Bannon "is a person who helped [Trump] win an incredible victory," according to The Los Angeles Times, and added that he's "confident about moving forward. We’re confident about the transition." That's also not particularly surprising, given that a public feud with an important member of Trump's new administration likely won't bode well for Ryan's political career, but underneath it all, there's no doubt that Bannon's view is certainly one that troubles a lot of people for many reasons. According to CNN, Senate Minority Leader Harry Reid targeted Bannon's appointment in a floor speech Tuesday, and said that "as long as a champion of racial division is a step away from the Oval Office, it would be impossible to take Trump's efforts to heal the nation seriously."

Given Bannon's role as a proud supporter of the alt-right, it's not even that shocking to hear him say something that at once totally dismisses mental illness as a legitimate issue, while also normalizing the idea that people should be hitting their own children. But even if it's unsurprising, it's still not something that anyone should be shrugging off. Mental health issues are an incredibly common struggle for many Americans — 1 in 5, according to the National Alliance on Mental Illness — and yet, the overwhelming stigma surrounding mental illness means that people often suffer in silence from something that can literally kill them.

The good news is that progress is being made: according to the Anxiety and Depression Association of America, a 2015 survey on mental illness and suicide found that the majority of Americans consider mental health a priority equal to physical health, and that they also view suicide as something that is "at least sometimes preventable," which indicates a growing understanding of the importance of mental health treatment and support. But comments like Bannon's underscore the reality that the notion of mental health is still considered to be a joke or an embarrassing personal failing to many people, and the shame that view perpetuates is dangerous.

Unfortunately Bannon isn't the only one in the Trump camp to hold this view. During Trump's campaign, Texas Sen. Ted Cruz's wife, Heidi Cruz, was targeted by Trump supporters for battling depression more than ten years prior. According to New York Magazine, Heidi Cruz's mental health came into the spotlight after Trump had threatened on Twitter to "spill the beans" about her during a feud with his former political opponent when they were both vying for the GOP nomination. While Trump never elaborated on what he actually meant by that, his tweet led to the story surfacing, and Trump supporters turned it into a reason why Republicans shouldn't trust her husband to lead the party.

It's pretty clear that this anti-mental health position is reflective of little more than judgment and stigma, but then, of course, there's the other half of Bannon's ridiculous statement: the idea that spanking kids is good for them. The notion that "sparing the rod," is an unwise parenting decision has long been an idea supported by many staunch conservatives (in fact, Ted Cruz himself made headlines when he advocated at a rally that spanking children teaches them to be respectful, according to the New Republic), but ongoing research into the matter suggests that spanking children could actually lead to increased mental health problems long-term (so, you know, there goes Bannon's theory).

According to the American Psychological Association, spanking children has been linked to "increased aggression, antisocial behavior, physical injury and mental health problems for children," and, furthermore, experts say that spanking doesn't even work as a disciplinary measure. While it might seem effective in the short-term — a kid who knows they are going to get spanked might temporarily comply — overall, it doesn't change the behavior, and in many cases, ends up making it worse, since the child has only learned how to solve problems with aggression. As Yale psychology professor and director of the Yale Parenting Center and Child Conduct Clinic Alan Kazdin, PhD, explained,

You cannot punish out these behaviors that you do not want. There is no need for corporal punishment based on the research. We are not giving up an effective technique. We are saying this is a horrible thing that does not work.

An April 2016 meta-analysis published in The Journal of Family Psychology by researchers at The University of Texas at Austin and The University of Michigan found that adults who were spanked as children were more likely to "exhibit anti-social behavior and to experience mental health problems," than those who weren't, and that the likelihood of those issues increased depending on how often they were spanked. Adults who were hit as children were also more likely to hit their own kids, further perpetuating the ongoing cycle of spanking's long-term effects.

But what is perhaps most significant about the study is that it suggests that the effects of spanking as a method of discipline were actually essentially the same as the effects of physical abuse, despite the commonly-held belief among parents who advocate for spanking that there is a difference between the two. As University of Texas at Austin professor Elizabeth Gershon noted,

We as a society think of spanking and physical abuse as distinct behaviors. Yet our research shows that spanking is linked with the same negative child outcomes as abuse, just to a slightly lesser degree.

The takeaway here for parents, appears to be two-fold: firstly, even if spanking is seen by some to be an effective method of disciplining a child, the research seems to be pretty clear that it really isn't at all — and furthermore, that spanking is detrimental, with significant long-term effects. The second, is that there probably isn't anybody who should be taking parenting advice from Steve Bannon. And in case it still needs to be said, experts who actually know things about mental illness overwhelmingly agree that it is a very real, very common, and very debilitating problem that often requires professional attention. Anyone who tries to advocate otherwise, it seems, is totally misguided at best. Even if he was just given a job in the Oval Office.

More Like This
Everything Parents Need To Know About Monkeypox
I’ve Learned A Lot Raising Black Multiracial Children. Here’s What I Want Fellow Parents To Know.
Yellowstone's Kelly Reilly Has A Much More "Content" Married Life Than Beth Dutton
20 Adorable Photos That Prove Prince William & Princess Charlotte Are Thick As Thieves