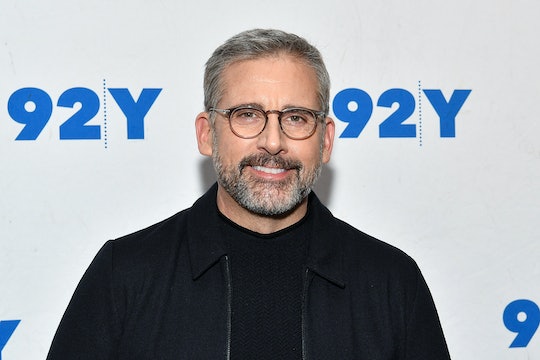 Some days I get to tell you guys the best possible news and it fills my days with glorious sunshine. Today, my friends, is just such a day. Because Steve Carell and The Office creators have a new show about Trump's Space Force, and obviously this is a collection of all the hilarious and good things in one perfect place.

In case you've forgotten about the momentous announcement from our charismatic Vice President Mike Pence last summer, President Trump has created a sixth arm of the already near-impenetrable American armed forces; the Space Force. Why, you ask? Well, if Pence is to be believed, the plan is to create a Space Operations Force which will act as an “elite group of war fighters specializing in the domain of space” just in case any aliens get the wrong idea about invading planet earth. Or at least, invading the United States. Of course, President Trump also noted potential earth-bound threats to the all-important satellites the American government has circling the planet, but I highly suspect this new series from Steve Carell and Greg Daniels, the creator of everyone's favorite television show The Office, will focus their attention on the former. Because it's really just so much funnier.

Carell and Daniels are working with their former colleague from The Office Howard Klein to develop a show based on Trump's Space Force; or more specifically "this is the story of the men and women who have to figure it out." Not surprisingly, The Hollywood Reporter noted that the idea for the show was initially sparked by Trump's June announcement that the Space Force would be developed. Truly, it's almost as though he wanted a show to be based on his announcement when he said this in June, as per The Verge:

I’m hereby directing the Department of Defense and Pentagon to immediately begin the process necessary to establish a Space Force as the sixth branch of the armed forces. That’s a big statement.

Trump went on to sign a memo in December ordering the Department of Defense to create Space Command, a separate military force designed to defend the borders which he wants up and running by 2020.

Obviously, everyone on the internet is already pretty excited about the idea of Steve Carell coming back to television. Especially if his series is going to unpack Trump's Space Force.

Space Force marks Carell's return to television after his spectacular seven-season star turn on The Office, although he is also slated to star in the new Apple TV Jennifer Aniston/Reese Witherspoon morning show drama as well. I think we can all safely say this is going to be the best thing to happen to television since The Office and I don't even care if that's unfair. As someone who prefers to spend a decent percentage of my time scrolling through Netflix, I am excited. Sure, we have to wait a while for a release date because quality takes time. But Netflix said "soon" and I guess I believe them.