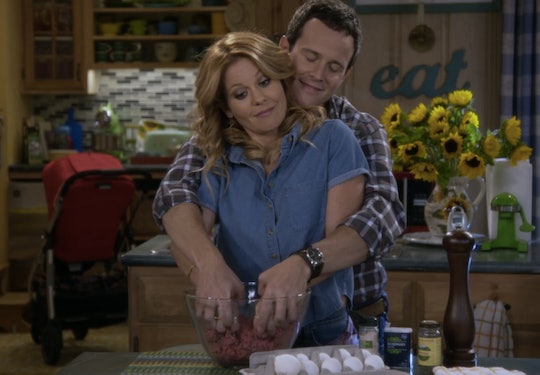 Steve Is A Little Too Aggressive Towards D.J. In 'Fuller House' & That's A Problem

There really is nothing like young love. It's usually as intense and illogical as it is sweet and fulfilling. D.J. and Steve in the original Full House are one of the greater teen couples of the '90s. They weren't Jordan Catalano and Angela great, but they're certainly up there. How that dynamic was going to play out 29 years later was one of the draws of the Netflix spinoff, but on Fuller House, Steve is a little too aggressive towards D.J., and it's a problem.

Grown-up Steve is still madly in love with D.J. but he takes the "mad" part a little too far. Steve's pursuit of D.J. throughout the series is anything but romantic. If anything, it's almost a crash course in how to spot potentially unstable and dangerous men. Seriously. There are lots of fans on social media who watched the new series rooting for Steve. But those fans seem to be letting their nostalgia and Steve's doofiness cloud their judgement — much like D.J.'s is on the show. There are several examples of his behavior that show a pattern of Steve not listening to D.J.'s needs, not taking no for an answer, and generally just going too far.

Think about it: when a bazillion roses show up with no note at the Tanner house, D.J.'s first instinct is that Steve sent them. A room full of roses is just as creepy as a single black one laying on your front stoop. It's not cute. It's sort of aggressive. And the more we call it out, the more hope we have for not socializing boys to act like this.

Of course, the chase is always the best part of any relationship. As long as it's respectful. First, he offers himself to her over and over again even though her response is nothing but an uncomfortable smile. He also tries to get in between D.J. and Matt before the two co-workers even acted on their chemistry. At the baseball game, he calls D.J. "his girl" just because they kissed.

Speaking of that kiss. D.J. was ready to tell Steve that she wanted to explore her relationship with Matt when he went in for a smooch. It looks like she liked it — I'm certainly not saying that he forced himself. Except that he had already forced himself into her life as someone who needed to be let down when she found another man because he was so intense about expressing his feelings for her since her husband's death. There are some emotional stalker-like tendencies there. Even at the "rose ceremony" he sets up a strange power dynamic by calling her by her full name, unlike Matt who says he wants to go on a "journey" with her.

He Liquors Her Up

This is where it goes from "oh he's just in love" to "oh, that's a little weird." During their day date, Steve pulls out a bottle of wine. As he pour her a glass, she stops him at the "enough" mark. But he keeps pouring. I'm as much a fan of a big glass of wine as anyone else (and apparently, D.J. who doesn't seem to totally mind). But check his glass out — they aren't day drinking together. It obviously wasn't the writers' intention, but the implication is that he needs to "loosen her up" by getting her to let go of her inhibitions. In another context, like getting a girl drunk at a frat party, it wouldn't be a very funny joke.

Some other viewers felt his behavior was getting closer and closer to disturbing, too:

There are probably viewers who think that calling Steve aggressive is too much. He just loves her, right? Maybe.

There is a long history of romantic comedies romanticizing behaviors that are akin to stalking. A recent Atlantic article looks at a study by Julia Lippman which looks at how portrayals of "going all the way," for love in media affect real life behavior. Is someone telling a women that he'll "wait for her every night" sweet or scary? That depends on if she actually shows signs of wanting him to wait for her.

Lipmann's study found that media portrayals of pursuit "as part of a normative courtship," like flying across the country to show up at her doorstep or chasing her down in a parking lot when she ignores you (both common tropes in sitcom and rom-com dating) can lead to "stalking-supportive beliefs."

If D.J. said even once to Kimmy or Stephanie, "Yeah, I liked Steve, but he's coming on too strong," that would be an entirely different story. But once again, the idea of relentless pursuit is romanticized, making Steve a viable choice as a partner next to Matt, who by all appearances, seems to be rather respectful in his crush. He even admits to "not wanting to compete" or play games to win her over. If only that sort of respect for a female's space and time were more often portrayed as sexy, rather than aloof.