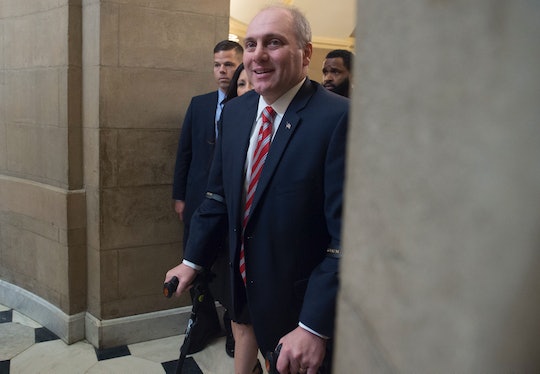 On Monday, a lone gunman perched on the 32nd floor of a room at the Mandalay Bay Hotel in Las Vegas. He looked down on a crowd of 22,000 strangers gathered for the Route 91 Harvest Festival and rained horrifying destruction upon them. The shooter opened fire on the crowd, killing at least 59 people and wounding at least 515 more, according to HuffPost. It was the deadliest mass shooting in modern American history. And yet, Louisiana Rep. Steve Scalise says Las Vegas "reaffirmed" his support of gun rights, rather than trying to curtail a level of gun violence across the country that is quickly reaching epidemic proportions.

It was an especially tone deaf and insensitive remark from Scalise considering his own recent recovery from being shot in the hip by a gunman at a congressional baseball game in Virginia in June. One might think that a mass shooting, coupled with one's own experience with being seriously injured, might open a person's eyes to the dangers of enthusiastically weaponizing people. Still, in an interview with Fox News on Tuesday, Scalise explained that people should stop trying to push a political agenda while pushing his own political agenda:

First of all, you’ve got to recognize that when there’s a tragedy like this, the first thing we should be thinking about is praying for the people who were injured and doing whatever we can to help them, to help law enforcement. We shouldn’t first be thinking of promoting our political agenda. I think we see too much of that, where people say, ‘Oh ok, now you have to have gun control.’

Scalise's office did not immediately respond to Romper's request for further comment.

Scalise, who is also the House majority whip, returned to his job on Tuesday, in his first full day of work after being shot. When he was asked by Fox News whether being shot weakened his support of the Second Amendment, he responded according to Mediate, "I think it's fortified it."

Of course, Scalise isn't the only politician (or indeed, the only person) to lecture people for thinking a mass shooting like the one in Las Vegas has anything to do with guns. Several politicians, including Vice President Pence and President Donald Trump, were quick to offer empty words of sympathy, condolences, and blessings.

But when it came to discussing gun safety issues, the White House drew a hard line in the sand. White House Press Secretary Sarah Huckabee Sanders was asked about stricter gun laws, and responded by saying "Now is not the time for political debate" about gun safety, according to The Los Angeles Times, though many on Twitter pointed out that now is the best time, or maybe the only time that politicians would listen.

The reality is, Americans own 48 percent of civilian-owned guns worldwide, according to a recent report by CNN. As of 2009, 310 million firearms were made available to Americans, the largest number of personal firearms purchase in the world by a long shot (India, the second largest purchaser, had 46 million civilian firearms in a stockpile.) Americans have had to live through 11 times more mass shootings than any other developed country on the planet, according to a 2014 study published in the International Journal of Criminal Justice Systems. And yet, politicians appear to repeatedly warn anyone who makes the connection between a ridiculous amount of guns and a ridiculous amount of gun violence to pipe down with their political nonsense.

Because prayers and sad faces after the fact are obviously the real answer.

I'm sorry that Steve Scalise was shot. But I'm also very sad and sorry that he didn't learn anything from that danger that would make him want to help those who may be threatened by gun violence in the future — and that he will continue to push the agenda of the powerful NRA, who want to see as many guns in as many hands as possible with as few questions asked as possible (notable, the NRA has been suspiciously quiet in the days since the Las Vegas mass shooting). It's not only unfortunate that Scalise and other representatives won't listen to Americans who want to talk about gun safety — because they represent Americans, their refusal to listen is also undemocratic.

I'm sorry that prayers and kind thoughts aren't enough to make this world a safer place. But most of the country is not sorry — and, hopefully, is not going to stop — being galvanized to speak out against gun violence after another mass shooting killed almost 60 people.