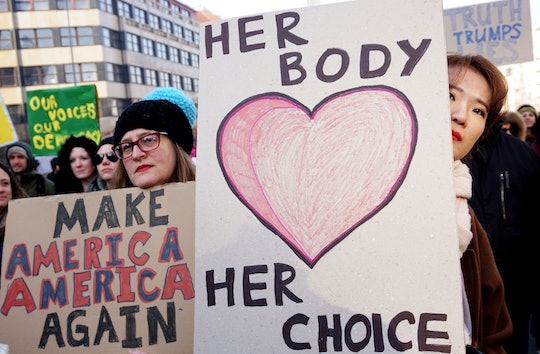 Stories From Women Affected By The Hyde Amendment

On Saturday, women marched. They marched on Washington to protest President Trump's campaign language that seemed to indicate that he would not be a president for all Americans. They marched in New York, in San Francisco, in London, and Paris, and even in Antarctica. It felt like a truly liberating, unifying moment during these terrible divisive times. And yet, here we are today. Trump and his posse of dudes arrogantly huddle around a desk, making decisions about women's reproductive rights. The House of Representatives just voted to make the Hyde Amendment permanent. It's not OK. And here are a number of stories from the women a permanent Hyde Amendment will be affecting to prove exactly why.

It's no secret that the Hyde Amendment has the greatest effect on low-income women. Medicaid cannot cover elective abortions, even when the mother is at risk and her doctor recommends an abortion. The bill does not allow any taxpayer dollars to be used for elective abortion procedures. Speaker Paul Ryan released a statement after the bill (dubbed the No Taxpayer Funding For Abortion Act), proudly saying that this is a "Pro-Life Congress":

This legislation protects the conscience of American taxpayers by ensuring that not a single dollar of their hard-earned money goes to fund abortions. As hundreds of thousands of Americans flock to Washington for the March for Life, we must never forget that defending all of our people—especially the defenseless—must be our top priority if we want to be a good and moral nation.

But Ryan's statement — and the statements of most of the men making decisions about women's health — totally ignore who this law will actually have affects on: and that's the living, breathing women who are definitely alive. Here are a few women who have been affected by the Hyde Amendment.

I'm not exactly sure why Ryan or Trump consider themselves the experts on women's reproductive rights. Perhaps they should talk to women like Alicia Hupprich, who had a late term abortion at 23 weeks because of a "devastating diagnosis." As she wrote for Romper, her husband works in the military and the Hyde Amendment prohibited the "use of private money to pay for abortions in military-treatment facilities":

It meant that our insurance wouldn’t pay anything towards termination of a pregnancy for fetal anomaly, and also that our doctors would not perform the procedure. But what hurt more than anything was the fact that they wouldn’t even point us in the direction of a safe and legal place to have it done. After receiving the most life-changing news, I felt judged and abandoned by my medical providers. Ending my pregnancy was also a part of my prenatal care and it was incredibly frustrating to have all medical support cut off. I was astounded at how inaccessible abortion was in my case. Even though I had the right to choose, it I couldn't access the medical care I needed.

Luckily, Alicia was able to finally gain access to abortion services. She survived her harrowing ordeal.

Not every story ends like Hupprich's, though, especially when abortion becomes impossible or incredibly difficult to access because of financial barriers. In 1978, Rosie Jimenez couldn't afford a legal abortion (at the time, a legal abortion cost around $230). The Texas native contacted a midwife, who performed the illegal abortion in her home (for $125) with medical instruments kept in "dirty water," according to the Texas Observer. Jimenez died of complications associated with the abortion. Abortions were made legal in 1973; the Hyde Amendment came into effect in 1976.

Alissa Manzoeillo of the National Abortion Federation shared a few more stories with Romper. Julie's story is a powerful reminder of the importance of having accessible abortion services in every state.

Julie C.*, a young mother of three living and working in Georgia. Although Julie is on Medicaid, it won’t cover her procedure because she lives in Georgia, which is one of the 35 states where Medicaid is banned from covering abortion care. Julie was able to ask her supervisor for an advance on her paycheck, and borrowed money from all the family and friends she could think of. In order to obtain her care, she needed to spend the night in another city, and had planned on sleeping in her car the night of the procedure to save money. Finally, with the help of the National Abortion Federation (NAF) Hotline, Julie was able to barely scrape together the funds she needed for her abortion care and a hotel room.

Reproductive rights are clearly not simply a frivolous choice; the right to make choices for your own body can sometimes feel like the only fight you can win, according to Manzoeillo:

Josephine* had recently moved from Texas to Florida with her two children to escape her abusive partner after he threatened to kill her. While trying to create a new stable home for her children, Josephine was raped and became pregnant. She couldn’t afford to pay for her abortion—nor could she arrange for transportation to get to the closest provider who was more than 80 miles away—so Josephine attempted to terminate the pregnancy on her own by ingesting poison. She ended up being hospitalized, needing several blood transfusions, and still pregnant. Josephine was finally able to gather enough resources to obtain her abortion procedure and arrange transportation to the nearest abortion care facility when she was 23 weeks pregnant.

The Humans of Hyde site also shares other stories of women who have gone through abortions and lived to tell the tale. In fact, the stories are collected directly from the abortion clinic waiting room. No two stories are alike, just as no two women are alike.

Debi shared her story about when doctors recommend an abortion for the health reasons.

When I had my son 14 years ago I had a cardiac episode. It left my heart weak. When my son was just under 2 years old my birth control failed. I was pregnant. Being pregnant started sending my blood pressure really high then really low. The doctors told me they didn't see a way for me and the baby to survive.While walking into the mall with my nearly 2 year old my blood pressure dropped and I passed out. I was lucky that people saw us and didn't kidnap my son. They called for help and I was taken to the hospital. Two days later I followed the doctors advise and aborted my pregnancy. It wasn't my first choice it was my only choice.

Forcing women to stay pregnant can sometimes mean keeping them in abusive relationships too, according to the Humans of Hyde:

I have two beautiful children, aged 4 and 1 years old. But, a week ago when I discovered I was pregnant again, I didn't hesitate in my decision and booked an appointment immediately. I'm in a emotionally and physically abusive relationship. During my first pregnancy, my children's father saw numerous other women and I was alone in the pregnancy. I struggled through my first pregnancy and raised my son alone for the first two years while I worked full time and went to school full time for my bachelorette degree.