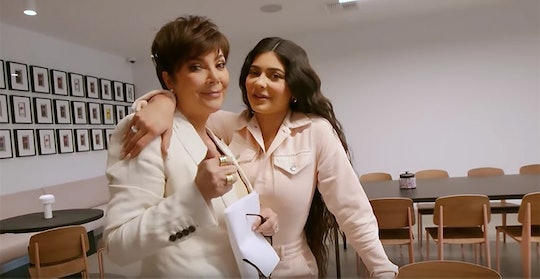 Stormi may only be 1, but she can already turn on the "blue steel" with the best of them. And not only does Kylie Jenner's baby already have her cover girl pout down pat, but she has the honor of growing up alongside powerful women. Want some proof? Look no further than Stormi’s first magazine cover with Kylie and grandma Kris Jenner, which is a stunning tribute to strong ladies everywhere.

In case you haven't seen the glorious photo already, the trio recently posed for the July/August issue of Harper's Bazaar Arabia, marking the first time little Stormi has posed for a cover shoot. An accompanying interview discussed the family, with Kylie disclosing her evolving kinship with Kris as she herself has become a parent, as Hollywood Life noted.

Meanwhile, Kylie's Instagram celebrated the occasion with a great caption about the famed family's matriarchal tradition. “Here’s to STRONG WOMEN! May we know them, may we be them, may we raise them,” Kylie wrote, alongside a fab shot of all three in animal-print accented outfits.

I don't know about you guys, but I just love this snap. While plenty has and can be written about the drama that tends to follow this large clan, the thing I've always liked about the Kardashians is their core belief in female empowerment. Even when the sisterly relationships get tense, you know that they'll all work it out in the end because that's really the family's main vibe — women helping other women along.

In addition to the stunning cover, Kylie talked about how parenthood has transformed her life for the better. “When I became a mother, my perspective on life completely changed," Kylie told Harper's Arabia, according to Cosmopolitan.

She continued, "...I look at my own mum and appreciate all the things that she’s done for me...Now I can understand the way that she feels about me, the way that she loves me, and how strong her love is for all her kids, because of how obsessed I am with Stormi.” Aww.

On the topic of how obsessed Kylie is with Stormi, she recently inspired a new tattoo for the mom and her BFF, as Yahoo News reported. Not to mention, the Kylie Cosmetics owner appears to balance motherhood and her professional life pretty effortlessly, proving that this whole parenting thing is most definitely her jam.

But despite all of her parenting wins, Kylie still gets overwhelmed from time to time, just like any other parent out there might. “Mentally, for me, I try not to focus so much on being a role model and still be myself," she shared, according to Cosmopolitan.

She added, "But I do understand how many young women look up to me and that I have to think about everything that I put on the internet or what example I want to set for my daughter. Especially now that I’ve had her, I think about that a lot more.”

And it's true that a lot of young women do look up to Jenner since she is, in fact, the world's youngest self-made billionaire, according to CNBC. Not too shabby.

But whatever Kylie and her now-equally famous daughter and mom do next, their bond is what's most appealing to me. And with the Kardashian/Jenner fame growing every second, it's only a matter of time before cover girl Stormi starts her own stuffed-animal company, or maybe a face-painting franchise? Anything is possible with empowered women like Kylie and Kris at your side!