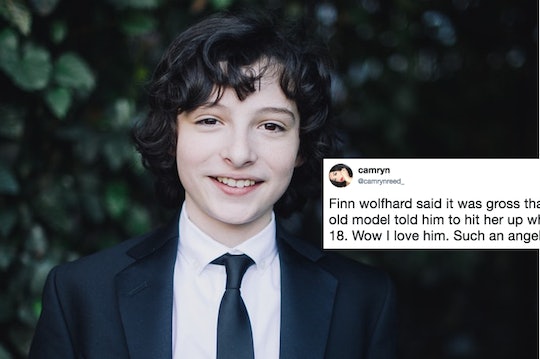 Last week, 27-year-old model Ali Michael was criticized online for a joked she posted on her an Instagram Story about wanting to date a 14-year-old Netflix star. Now, Stranger Things' Finn Wolfhard has called the model's joke "gross" and watching the video of his response is gut-wrenching. Michael apologized for sexualizing the teen last week and wrote in an statement to Teen Vogue, "To those I offended or misled, I apologize for a post made in haste and lacking in sensitivity, particularly considering the landscape of the present culture [of sexual assault allegations in Hollywood]." Romper's request for comment from Michael's representatives was not immediately returned.

The story did eventually make it back to Wolfhard, though, who was stopped by TMZ this week and asked about the controversy. The teen said, visibly uncomfortable, that the model's joke was "gross" and then noted that it was "good" she apologized. Wolfhard then shrugged and said, "it's fine," in an attempt to end the interview, or the conversation about a 27-year-old woman objectifying him in a sexual manner.

It's tough to watch him respond to the model's joke because it's reminiscent of how millions of women respond every day to sexual misconduct and micro-aggressions. Sometimes it feels like shrugging it off and going "it's fine, whatever" is the only way to make it through the day. Wolfhard, who is still so young at just 14 years old, is no different.

His demeanor and response to the TMZ reporter is a testament to the fact that jokes like Michael's are never innocent. Following her comments, there were just as many people calling her out for her predatory behavior as there were people who thought it was no big deal or that people were somehow missing the humor. Wolfhard is a minor and his timidness and awkward reaction to the question about the joke should be proof enough that Michael's comments were creepy and inappropriate. He is just a kid.

People Were Not Happy About It & Rallied Right Behind Him

Wolfhard has a lot coming at him, too, these days. With the success of Stranger Things Season 2, fans are really hounding him. This week, again, people were calling him "rude" for not stopping to take a picture outside of his hotel. With adult fans. So yes, adults were waiting outside of his hotel and angry that he didn't stop to say hello or smile in the nonconsensual photos they took of him.

This situation begs the question, much like the reactions to Michael's "joke" did — if a grown man complained that say, Millie Bobbie Brown didn't stop to hug him, what would people be saying?

Game of Thrones' Sophie Turner Shut Down The Haters

Sexualizing child actors — or anyone — without their consent is really gross. According to Psychology Today, sexualizing children can lead to behavioral problems and mental health issues later on in life. And that's just for "regular" kids who aren't on everyone's favorite show.

There's a reason why so many Hollywood child actors often grow up and hit rocky periods in their young adult lives, sometimes never really recovering from mental health or substance abuse issues. It's not just "gross" to sexualize a child star, it's actually quite dangerous.

Luckily, Wolfhard seems to be surrounded by people who are out to protect him as he becomes more of a household name. When his agent was reportedly accused of sexual misconduct last month, Wolfhard promptly dropped him, according to The Hollywood Reporter. Whether it was the teen's own decision or a team effort led by another well-intentioned adult in his life, the Netflix star obviously understands that Hollywood can be a nasty place.

It's a shame that he's being asked to stand up for himself in this way, so early in his life and career. So, everyone just relax and let him enjoy being 14 and all of his success.