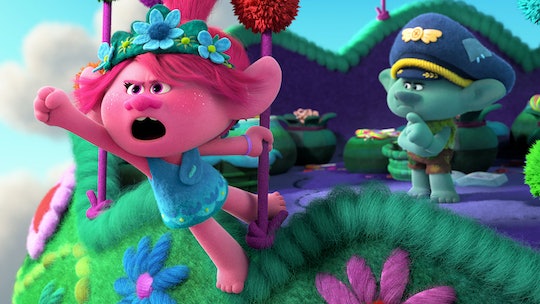 You Can Officially Stream 'Trolls World Tour' At Home TONIGHT

Cancel whatever Friday night movie plans you had because you can now officially stream Trolls World Tour online at home. Starting Friday, April 10, the same day the movie had been planned for a theatrical release, the follow-up to the 2016 smash hit Trolls is available to watch on various platforms.

Trolls World Tour, starring Anna Kendrick as Poppy and Justin Timberlake as Branch, is now available to stream online and there are several ways to watch the movie with your family. You can rent it for $19.99 through Xfinity, Amazon Prime Video, iTunes, Google Play, YouTube, Fandango, and Vudu.

And starting at 5:30 p.m. EST on April 10, Walmart is hosting a Trolls World Tour Watch Party to celebrate the premiere. This is a great option for families who might be missing the whole theater experience as Walmart will offer interactive extras like trivia, behind-the-scenes clips, polls, prizes, and movie facts for little Trolls fans. To join the Walmart Watch Party, you'll need to rent your copy of Trolls World Tour on Vudu, follow @Walmart and @Vudu on Twitter, then head over to Walmart's Twitter page to watch the red carpet event before the movie gets going at 6 p.m. EST. Add some snacks in there and you've got yourself a great Friday night.

However your family chooses to watch Trolls World Tour, it looks like you're going to enjoy it. Early reviews of the movie are looking good, with a Rotten Tomatoes rating of 73%. And according to Common Sense Media's review, the sequel "encourages inclusion and diversity."

In Trolls World Tour, Poppy and Branch discover that there are actually six Troll kingdoms full of all sorts of different kinds of music rather than the one where they live: Funk, Techno, Classical, Rock, Pop, and Country. All six kingdoms will need to come together to fight off the Rock Trolls who only want to spread their own music. So you know this one is going to be chalk full super catchy tunes like the first one had, i.e. Timberlake's "Can't Stop The Feeling."

Whatever else might be going on in the world right now, a Trolls World Tour movie night sounds like a great way for the whole family to have a little fun at home this weekend.