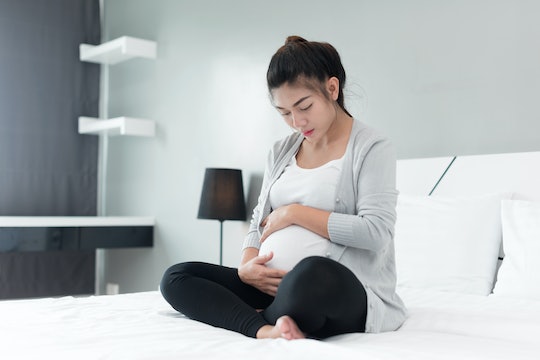 From building the crib to stocking the freezer with pad-sicles, preparing for a new baby guarantees a long to-do list. But for many expectant moms, stress during pregnancy comes from more than just those usual prep steps. Finances, relationships, work policies, and concerns about labor and birth can stack on the stress quickly.

For moms, ongoing stress while pregnant can cause trouble sleeping, digestive issues, high blood pressure, and overall muscle tension according to Parents. For babies, too much stress before birth has been linked to low birth weight and preterm labor, which put babies at higher risk for cerebral palsy, developmental delays, and even infant mortality, noted the same Parents article. Some doctors also believe a mother’s chronic stress can affect their infant’s developing brain, leading to behavioral issues as they grow up.

“Stress can have a variety of effects on our physical being, and there are lots of theories on how it could affect babies, like that activating the fight-or-flight response would decrease circulation to the baby,” says Kathy Loebel, CNM at Lone Tree OB-GYN and Midwives in Denver in a phone interview with Romper. “Or, stress may lead people to overeat, which can lead to gestational diabetes, which can make you more likely to have a C-section, which just adds more stress.”

Loebel says her patients don’t get too caught up with the little things, like choosing a paint color for the nursery or stockpiling diapers. It’s the big stuff that makes them anxious. “When someone is stressed that their nursery isn’t ready, I feel happy and like I don’t have to worry about them,” she says. “Finances are a huge concern. Many women worry about how soon they have to go back to work. How do they navigate child care? Who’s going to watch their baby? By the second or third child, it’s not so clear if working is worthwhile, so finances are of concern for most patients.”

Michelle Wiersgalla, MD, a psychiatrist at Park Nicollet in St. Louis Park, Minnesota, tells Romper that strained relationships and a mother’s identity are the concerns she hears from her patients most often. “Having a child can bring up stressful family dynamics. They have questions of identity, and who they are as a person, and how that changes once they have children. That’s a big opportunity for therapeutic intervention in our office. Also, I have a lot of people who get stressed out if they have any medical complications with their pregnancy.”

Danielle Jones, MD, an OB-GYN at Baylor Scott & White Health in College Station, Texas, tells Romper her patients share those fears of something going wrong with their baby. She also hears from women who aren’t sure when or how to announce their pregnancy — for many reasons. “Some patients who are younger or who have unplanned pregnancies worry how they will tell people. Patients in high-power careers tend to worry about that as well — when they should tell people and the logistics of letting people know they’re pregnant,” she says.

Women in minority groups have additional worries to face during pregnancy. March of Dimes cited “stress from racism during their lives” as one reason African American women may have higher rates of preterm birth and babies with low birth weight than other women.

“We know maternal mortality in the U.S. is a crisis, and there is a racial disparity in that number, and particularly with recent media coverage, black women are coming in worried they’re going to die,” says Jones. “It probably comes down to systemic racism with difficulty in access to care and different insurances. Access issues because of racial disparities certainly could cause added stress.”

“I’ve had many patients who are people of color or within the LGBTQ population who struggle with racism or prejudice on a daily basis, and health care equity can also be concerning," adds Wiersgalla.

If an expectant mom is stressed by things that feel out of her control — finances, workplace policies, or just trying to get access to a doctor — how is she supposed to reduce her stress for her health and her baby’s?

Loebel recommends watching out for symptoms of uncontrolled stress like undereating, overeating, sudden weight gain or loss, headaches, stomachaches or new relationship issues. These are signs that it’s time to take action.

“Women are very hesitant to bring up anything negative about their pregnancy,” says Loebel. “If you perceive something as a stress, communicate it to your provider. Either there’s an intervention that can be done, or at least get some acknowledgement and work on how to decrease it so you don’t experience symptoms.”

Wiersgalla says women who meet criteria for things like anxiety or depression can get help from therapy and medication, just like they would if they weren’t pregnant. More often, she focuses on finding a community for her expectant patients. “For pregnancy-related stress, we tend to recommend support groups. The advantage is that you’re around people who get it and have lived through similar experiences, so they have advice or, if nothing else, a shoulder to cry on. I think an in-person community is a lovely way to do that if you have access to it.”

In the end, Jones says the most important part of managing stress during pregnancy is just trying to reduce it a little each day. “I always recommend meditation, regular exercise, yoga, getting plenty of sleep, and letting me know if there’s something going on so we can address it in the office or put you in touch with a counselor. It’s important not to get caught up in, because then people worry their stress is harming their baby. There are things you can do to minimize stress, and it’s not so associated with harm you should be obsessing over it, but working to decrease those things as much as possible.”

More Like This
20 Bridgerton-Inspired Baby Names
Rainbow Baby Shower Ideas To Celebrate A Very Special Baby
Are You Leaking Amniotic Fluid Or Is It Normal Discharge? Experts Explain
Are Boy Babies Usually Late? Signs Your Baby May Be Born Late