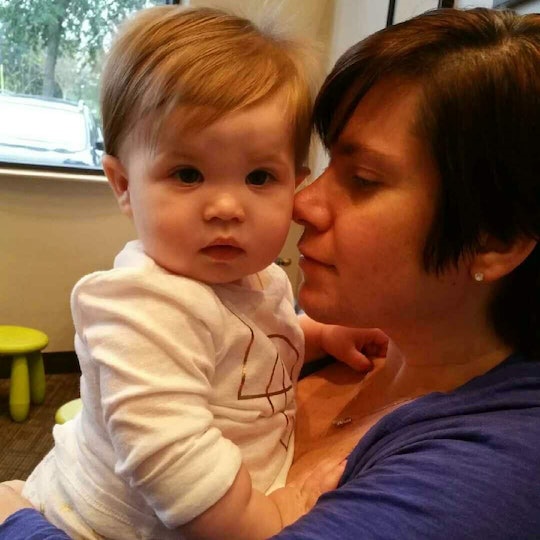 Can We Please Stop Lying About How All Moms Magically Bond With Their Newborns?

New motherhood should be a time of bliss and bonding. Of days spent ignoring the laundry because you’re cuddling with a newborn. But for some moms, especially those dealing with health complications or feeding problems, the ideal of cozy, oxytocin-fueled mom-and-baby bliss may not be the reality — and that can cause an incredible amount of shame. In fact, many new mothers struggle to bond with their babies — a combination of the challenges that new mothers face as they adjust to a major life change, the glaring lack of postpartum care, and completely normal emotional ups and downs as mother and baby connect over time. As midwestern mother Amy recalls to Romper, when she had her son, she was "more consumed with the possibility of him dying than building our relationship," and was affected by anxiety for about four months postpartum. Understanding little about what to expect in the newborn period, she was blindsided by her feelings.

While many expect the infant to connect almost immediately to its mother, PsyBlog reported that "Only between about 3 and 7 months of age do babies start to show a strong preference for members of their own family," citing research published in Jeffrey Simpson's paper, "Attachment Theory In Modern Evolutionary Context." Similarly, mothers often take time to bond with their infants. As Cornell University anthropologist Dr. Meredith Small told Mothering's Jennifer Marguiles, "Bonding is not instantaneous, but a process — a relationship that grows from being together over time."

The gap between our expectations and the reality can be damaging. Reproductive psychiatrist Dr. Alexandra Sacks has reintroduced the concept of "matrescence" (sounds like adolescence) into the public lexicon as a way to understand the profound changes a women experiences as she enters parenthood. She explained on a panel recently hosted by Plum Organics and attended by Romper that a simple awareness of what you are going through can help alleviate the anxiety and despair. "A lot of patients come to me asking if they have postpartum depression," she said, "and when I explain to them what I understand and experience are the main pillars of matrescence, they feel tremendous relief and their symptoms go away often."

For this reason, it is really important that we talk about the range of bonding experiences and normalize the challenges faced by women in a society that offers bare support postpartum. So Romper talked to five moms about their experiences in the early days of motherhood, when bonding with their babies didn’t come naturally. Here’s what they had to say.

My son came three weeks early in 2017. On our first day, there wasn’t much bonding due to my own complications in delivery and him being in the special-care nursery. We had some major postpartum issues once home. My son had reflux and other health concerns, but I was OK until my husband went back to work. I managed to hold it together the first two days alone, but then I literally lost my shit. I was terrified my son would die, and that I couldn't do what I needed to help him. I remember calling my mom sobbing, telling her, "He's probably going to die.” Our bond suffered in that time. I was more consumed with the possibility of him dying than building our relationship.

You want and wish for it and then it happens and you think WTF did I just do?

It lasted about four months, and during that period he cried all the time. We were dealing with his health issues and an eventual surgery. Through it all, my husband was by far my greatest support. He took time off work, dealt with a newborn that I had no idea how to deal with, and put up with his semi-psychotic wife. He deserves a medal.

To those moms feeling alone in your thoughts: Having a baby changes your entire life. You want and wish for it and then it happens and you think WTF did I just do?

We tried for our second baby when my first was almost two, and it happened almost immediately. I was willing to get pregnant one more time because I already had two miscarriages. To say I was terrified was an understatement, and in 2013, my daughter was born. I struggled juggling a toddler and newborn because I was the primary parent and was dealing with postpartum depression and anxiety. I didn't have time to connect with my baby because I didn’t have any help with my toddler. Her cries felt like they could break glass. I was constantly holding her because if she cried my husband would yell at me to shut her up. The resentment was huge and I didn't care if she died. That lasted three years.

When I left my husband, I realized it was him I resented and not her.

I was diagnosed with postpartum depression and anxiety in 2015 and started medication. When I left my husband, I realized it was him I resented and not her. While I still have moments, I realize anxiety will continue to be an issue. No one knew the extent of what was going on because I didn't want anyone to know. I didn't want help.

To the other moms struggling: Reach out. Even if you don't think you have support, there is always someone there.

My son was born in 2014 and spent 20 days in the NICU for breathing issues and a cleft lip and palate. Because of this, I became obsessed with being able to supply breastmilk for him because his surgeon said how important it was. It soon became all I could focus on.

I was constantly worried my son would die, or I would.

I have always struggled with some anxiety, but it became so bad that I just didn't want to take care of him. All I wanted to do was produce milk to feed him. That was my job. I loved him more than anything, but I didn't feel that connection. I felt like he didn’t like me, and I couldn’t bond with him because I think he felt my fear. I was pushed to having to take care of him once my husband went back to work and I was constantly worried my son would die, or I would.

That period lasted six months, but I struggled with postpartum depression for the next year and a half before finally starting on medication. I didn't have much support because I didn't admit anything to anyone.

There are so many things I want to say to you moms also feeling the strain, but the most important one is to not be ashamed. Postpartum depression happens to so many people.

My daughter was born in 2015 and her birth was the longest 36 hours of my life. I felt like the nurses were attentive, but any instruction on breastfeeding was lacking.

I had my six-week appointment, and when my doctor asked how I was, I burst into tears.

After we were home, I struggled. I was barely sleeping because I was afraid something would happen to my daughter if I wasn't around. I had no idea what I was doing, but I would be damned if anyone else took her from me. The worst moment was when she was crying for hours one night, and nothing would soothe her. I remember thinking this was how women hurt their children. The next day I had my six-week appointment, and when my doctor asked how I was, I burst into tears. I told him I hated being a mother, that my daughter hated me, and I wasn't sure I could do this. I started on Zoloft that day.

During all this, I had friends that kept telling me, “You'll love her, you'll fall in love.” But what I really needed was someone to tell me that the darkness I was living was normal — that I wasn't the only mom to feel like this.

To other moms: The infant stage is hard, and adjusting is hard. If you feel like you need medication, there’s no shame in that.

It was surreal to have our son here after what it took to conceive him. When he was just three days old, the pediatrician at the hospital called us to come back in because my son’s jaundice levels had increased dramatically and he needed treatment. Because he also had tongue and lip ties, I pumped and bottle fed to get nutrients into him. I think these challenges contributed to my struggle to bond with my baby.

It was when he started to smile that I felt like he really loved me, and the endless giving of myself to him was being appreciated.

Plus, my husband went back to work when I was two weeks postpartum, so I was going through a lot of adjustment alone. I constantly worried about the worst case scenario and there were times I didn't even feel like he was my baby.

It was when he started to smile that I felt like he really loved me, and the endless giving of myself to him was being appreciated. Nursing didn't work for us, and I felt tremendously guilty. But I finally started to bond with him because I could enjoy feeding him with a bottle of my milk, versus us both being in tears when we tried to nurse.

To the moms out there struggling: Each day is a new day. Take a deep breath, start over, and know you’re going to be OK.

Thanks to the women who shared their stories. If you believe you are suffering from postpartum depression, you can call Postpartum Support International on 1-800-944-4773 or chat with an expert online on Wednesdays.

More Like This
Here's How To Keep Your C-Section Incision Dry
30 Adorable Baby Halloween Costumes, From Animals To Avocados
The Difference Between The PICU & The NICU
43 Awesome Toys For 18-Month-Olds