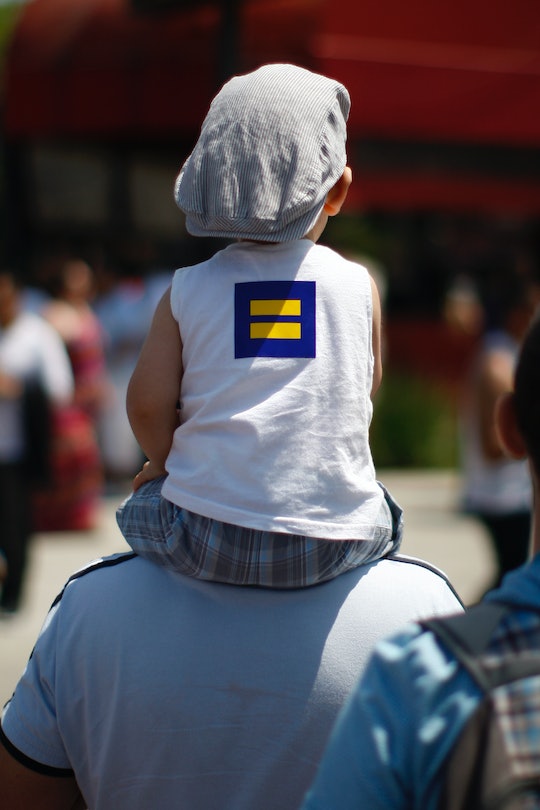 As parents, we want to do right by our kids, raise them to be happy and healthy and kind of full of empathy. Perhaps most of all, we want to raise them to celebrate the person they are meant to be, while we celebrate that person as well. Luckily, there are plenty of studies on kids' gender identity these days that prove that allowing children the room to grow in their identified gender provides them with a solid base of strong mental health. Because family support is important when trying to figure out who you are, no matter who you are.

A 2016 study, published in the journal Pediatrics journal, found that transgender children raised in homes where their families used the proper pronoun for their identified gender, rather than the pronoun of the gender they were assigned at birth, tended to have less anxiety. These children also had family support when they were transitioning socially to their identified gender, whether that meant changing their wardrobe, hairstyle, or even name.

According to The Guardian,

Researchers assessed the mental health of 73 socially transitioned transgender children aged three to 12, using National Institute of Health questionnaires answered by their parents. These results were compared to those from two groups of non-transgender children: 73 of the same gender identity from the same community and 49 siblings of children in the transgender group.

Sadly, the study found that the transgender children did have elevated levels of anxiety. Fear of rejection, thoughts of suicide, and depression were issues in some cases. But it also noted anxiety levels were decreased significantly when family support and acceptance were present. The study, which was co-authored by Kristina Olsen and Kate McLaughin of the University of Washington, concluded:

That familial support in general, or specifically via the decision to allow their children to socially transition, may be associated with better mental health outcomes among transgender children. In particular, allowing children to present in everyday life as their gender identity rather than their natal sex is associated with developmentally normative levels of depression and anxiety.

In other words, having a supportive family from the outset should offer a solid foundation for whatever the future might bring.

This study went a long way in dispelling a widely-held myth, that gender identity was somehow "just a phase" and many children could potentially grow out of it.

Another study conducted in April by the University of Washington found that children use gender preferences as one of the "earliest identity and social categor[ies] to emerge in development," and that both transgender and non-transgender preschoolers exhibited a "strong and clear sense of their gender identity."

An increasing number of transgender children -- those who express a gender identity that is different from the sex they were born with -- are transitioning socially, which means they use pronouns, names, and clothing associated with their identified gender in everyday life. In this study, we asked whether these children differed from their nontransgender peers on basic tasks related to gender development at an early age.

Hopefully, studies like these will help transgender children and their families transition socially with empathy and consideration, so that all children can grow to be the people they are supposed to be.