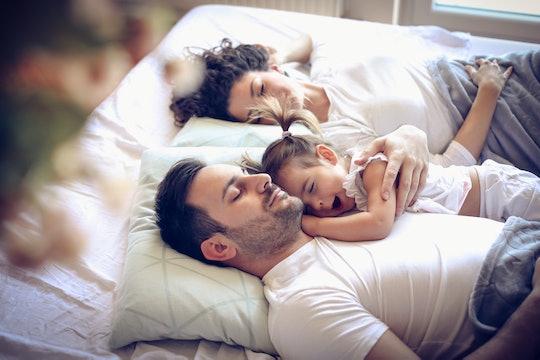 It should come as no surprise that parents all over the country feel frazzled about finding time to be by themselves or to be alone with their partners. But a new study has found out exactly how many date nights parents actually get and it's sort of sad to see it in writing. But, it's also very, very relatable.

The study was done by Visit Anaheim, which is a marketing organization for the city, a popular destination for family vacations. So, they have an interest in figuring out what the average family does in their free time and how they manage work, childcare, self care, family time, and then their partnerships. But what they found is sort of surprising. Basically — people with kids are not getting enough date night time at all, especially while kids are still in school.

The organization looked at 2,000 families with kids between the ages of 4 to 18 years old and found that 54 percent of parents reported getting only about 12 dates at the most per year and one in three (which is about 31 percent) have less than one date a month. Those with older kids reported getting about 20 dates a year, which is better, but still not ideal. To make matters even more dismal, 65 percent of parents say that their "dates" might often revolve around running errands or doing chores together.

To be real, going to Target and getting tacos after actually sounds like a lot of fun. But the focus is still the household even when you're trying to get one-on-one time. About 54 percent of the people in their study reported that they felt they didn't get enough quality time with their partner, so I'm not alone in feeling like a run to the grocery store isn't exactly the way to get into the mood, if you know what I mean.

Life is hard. Work and school schedules, chores, and intense extra curricular schedules for the little ones (who knew a soccer team could have so many games?) makes it hard to sneak away for a night. Not only are you exhausted and likely want to just watch television in bed, getting a babysitter is hella expensive. Romper's Christie Drozdowski sums it up perfectly in an essay about the classist difficult nature of "taking time" away from your kids:

Having the money and resources to enjoy time off without your baby is a concept only familiar to privileged families. Each time we tell moms to indulge in "me time," we need to remember that. Poor moms, working moms deserve time off, too. The answer to families under stress can't be for everyone to just rustle up the money for a babysitter and night at Olive Garden. We need to recognize the underlying need for family and maternity support.

Still, research shows that couples who find a way (with the help of family and friends and affordable childcare) to make time for the ever elusive date night have relationships that fare better in the long run. The Millennium Cohort Study of 10,000 mothers in the United Kingdom found "couples who went on monthly date nights together were still slightly more likely to stay together than those who hardly ever went out."

The good news? Going out weekly didn't seem to help, so that average 12 date nights a year from the Visit Anaheim study isn't so bad. The Millennial Cohort study found that "the odds of splitting up among couples who went out monthly or less often were 14 percent lower over the next 10 years compared to couples who went out either weekly or rarely." So making one night a month just for you and your partner is worth trying.

There's one big caveat, though. The effect of staying together longer thanks to a monthly date night only mattered if couples were married. There was no difference among cohabiting couples that did or did not take a monthly or even weekly date night.

So if you feel super frazzled and feel like you're not getting enough time with your partner, you're not alone. And if you can, ask grandma or someone to give you a hand once in a while so you can sneak out for a few hours with your significant other. Even if it's just to the grocery store or Target followed by some frozen yogurt, which it might have to be.