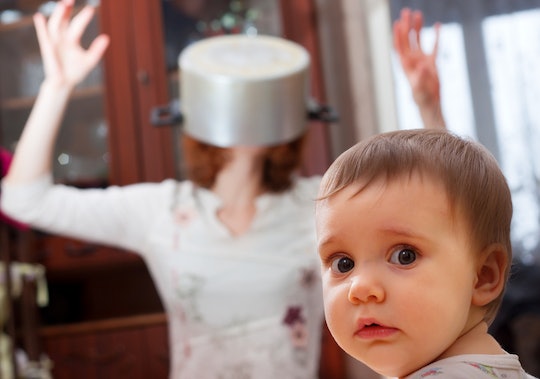 No one likes messing up in front of other people and that's especially true for parents. It often feels natural to hide the hard stuff from the kids, in the name of protecting them and keeping their lives as calm as humanly possible. But a new study shows that screwing up in front your kids is actually good for them in the long run. Why? Well, as researchers found, little ones learn a whole lot from watching you try, fail, and keep at a difficult task.

This is especially true of babies. You know, the same ones that never seem to let you get a minute of peace and seem to watch your every move? Well, it's not all in your head. This study found that infants are watching their grown-ups closely and mimicking not just what they see them do but how the adult handles the situation.

Researchers at the Massachusetts Institute of Technology did three experiments on over 250 children in the 13 to 18 month range and found that the child was more likely to do something more difficult if they had just seen an adult sweat over a problem recently, according to CTV News.

And it wasn't just about copying the adult behavior per se since both the parents and the children were given separate tasks for the experiments. The infants paid attention to how hard the adults around them worked for success.

Here's What The Adults Did

For two groups of babies, the researchers tried to remove a rubber frog from a clear container and then also unhook a key chain from a carabiner. In front of one set of kids, the researcher did both tasks within 30 seconds, in front of one another for just 10 seconds. The whole time, the researcher was verbal about their frustration. "'Look at that! I want that! How does that come out?" were some of the comments.

Seems simple right? It's also something parents do in front of kids all the time. Think about how one might struggle with a jar of baby food in the kitchen or try to make the car seat snap in just the right way. These are things kids are watching all the time.

Here's How The Babies Responded

After watching just a few seconds of frustration, the babies were shown a box could play music and they could turn it on. The box had a huge red button on it, but it didn't work. Yes, they tricked the babies.

It was almost double, actually. The infants who watched the researcher fight with the key chain and the jar pressed the button about 23 times on average as opposed to the 12 times the infants who had seen the researcher succeed right away did. As a control, another group of infants who didn't watch any adult do anything were handed the same music box with the same button.

They pressed the button for about 12 times before giving up, too, just like the infants who had watched the researcher try and succeed with her tasks.

The researchers ran the experiment a few times and the average of times a baby pressed the button on their music box increased if they had been in a group with a scientist that engaged the children while struggling — like making eye contact or talking more about what they were doing.

So What Does This Mean?

While they didn't figure out how long this effect would last on an infant, it does show that babies watch and learn. Laura Schulz, the senior author of the study, told the Associated Press that it shows that children can learn the value of hard work with just a little demonstration.

So the next time you're struggling with your car keys and the baby is crying and your stress levels start to go up in the middle of the grocery store parking lot...breathe. And then instead of trying to hide your frustration, work it out with them. You're talking to them anyway, right? Might as well turn it into a life lesson that'll stick.

If anything, it can't hurt your anxiety about being totally frazzled and beaten by a some mundane, frustrating task. But your infant might be soaking all of that action up and in the long run, will learn that if at first you don't succeed, keep at it.