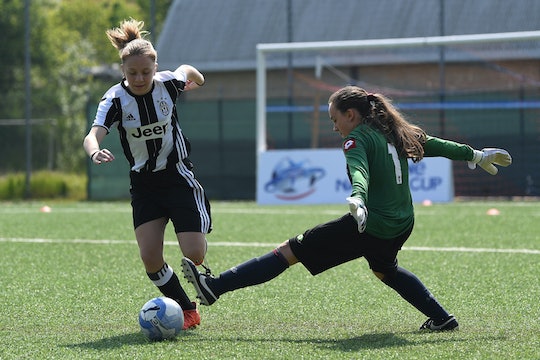 Girls Twice As Likely To Quit Sports By High School

I hated sports when I was a teenager. I felt awkward, and centered out in a way that had me breaking out in hives. Also, growing boobs didn't help much with the running and the sweating and the boys' terrible comments. It took me decades to come back to it. Most of my friends tell the same story; loving sports, hitting teen years and suddenly backing away. Which is so unfortunate, and apparently common throughout the generations. A new study showed girls were more likely to quit sports before high school than boys. And I'm thinking it's time that changes.

According to the Women's Sports Foundation, girls tend to drop out of school sports twice as often as boys by the time they hit 14-years-old. The Foundation conducted a 25 year long study looking into girls' participation in sports before coming up with this depressing statistic. Their research pointed to a few key factors behind this drop in sports activity among girls, one of those being a simple lack of access.

Girls have 1.3 million fewer opportunities to play high school sports than boys have. Lack of physical education in schools and limited opportunities to play sports in both high school and college mean girls have to look elsewhere for sports –which may not exist or may cost more money. Often there is an additional lack of access to adequate playing facilities near their homes that makes it more difficult for girls to engage in sports.

There were other factors keeping high school girls out of sports as well. The social stigma that goes along with being a "sporty" girl certainly doesn't seem to help matters much. Nor does the high cost of sports, the lack of positive role models, difficulty finding transportation, or the decreased quality of experience. Never mind that girls who are involved in team sports tend to have a more positive body image than those who don't participate. Or the myriad of health benefits that go along with being involved in sports in adolescence can bring; studies have shown that playing sports as teens can decrease the odds of breast cancer by 20 percent. Girls are simply not being offered the same sports opportunities as boys. And it's ridiculous.

Two students at Liberation High School in New York, where there are not any girls' sports teams at all, recently created a video for the Alliance for a Healthier Generation to talk about what the lack of access to sports teams means to them.

Yana, one of the two girls in the video, said:

Growing up as a girl you're always told you just want to look pretty. And sports have to do with getting messy, getting competitive, getting dirty. I don't think that way, but I know a lot of people do.

The girls were supported in the video by one of their teachers, Tiffany Gross, who noted:

At age 14, those types of insecurities are becoming part of who you are. If girls were to play more sports, I really feel like that would build confidence at an age when it's really important.

Playing sports on a team, being part of something that has to do with physical endurance rather than physical appearance, can change the narrative for young girls trapped in a constant deluge of being told to look better, thinner, prettier. Girls' sports shouldn't be considered an elective; they should be considered imperative.