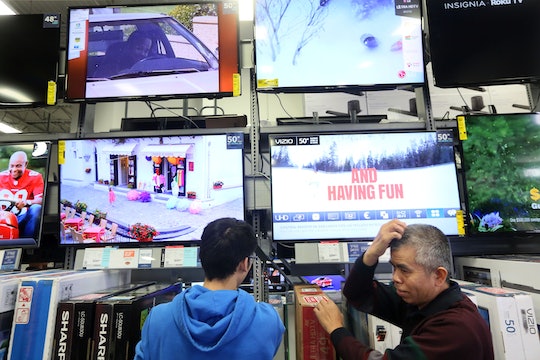 These Super Bowl TV Sales Are *Huge,* & Will Make You Want To Throw A Party ASAP

It's hard to believe, that the Super Bowl is just weeks away, where the Rams will play the Patriots to determine who's the best team in the nation. All over the country, people will be hosting Super Bowl parties and watching the big game on their big screen televisions and digging into chicken wings and spinach artichoke dip. Because this is such a popular time of year to gather around the television, sales are everywhere — including electronics to perfect your game viewing. The best TV sales for your Super Bowl party are just a few clicks away.

Whether you're watching the big game or the Oscars, it's important that you're getting a quality viewing experience. Just last year, about this time, my husband and I bought our first new television in ten years. I did what I always do, which means I dove into heavy duty research. I found the best models and what everything meant, and then I searched each store both online and in the brick and mortar location. The only thing I didn't choose was the size. My husband was dead set on the 65" model, whereas I wanted something considerably smaller. I lost that round, but now, I can't imagine watching Game of Thrones on anything smaller. Khaleesi deserves the big screen. That scene between her and nephew Jon Snow? Maybe not as much.